“The packages were immediately identified during routine mail screening procedures as potential explosive devices and were appropriately handled as such,” the Secret Service said in a statement.

“The protectees did not receive the packages nor were they at risk of receiving them.” A device constructed with a pipe and wires was also sent to the Time Warner Center, where the CNN studios are located, prompting an evacuation on Wednesday. 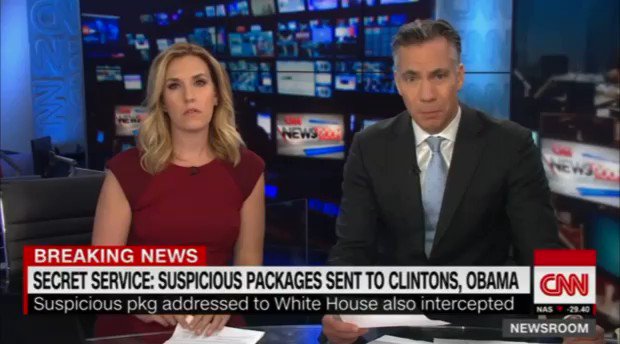 CNN reporters broadcasted from the street outside their newsroom in a bustling part of Manhattan, saying they heard the fire alarm and the lights went off before they evacuated.

New York Governor Andrew Cuomo, a Democrat, told a news conference that a suspicious device was also sent to his office in Manhattan. It “has been identified and is being handled as we speak”, he said.

An apparent explosive device was also found in a mail box outside the New York residence of billionaire financier George Soros on Monday. Agents described it as a small pipe bomb made from about 6 inches (15 cm) of pipe and filled with explosive powder.

The NYPD’s deputy chief of counterterrorism John Miller said the explosive devices sent to CNN, Clinton, Obama and Soros all appeared to be crude pipe bombs.

“What we saw here today was an effort to terrorise,” New York Mayor Bill de Blasio told a hastily gathered press conference. “This is clearly an act of terror, attempting to undermine our free press and leaders of this country through acts of violence.”

“I want to make very clear that the people of New York City will not be intimidated, that we”re going to go about our lives undeterred, because the very concept of terrorism is to change us and we will not allow that to happen,” he added.

The White House released a statement condemning the attempted attacks.

“These terrorising acts are despicable, and anyone responsible will be held accountable to the fullest extent of the law,” said White House spokeswoman Sarah Huckabee Sanders in a statement Wednesday.

“The United States Secret Service and other law enforcement agencies are investigating and will take all appropriate actions to protect anyone threatened by these cowards.”