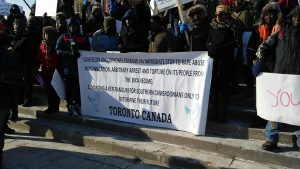 Southern Cameroonians in the cities of Toronto, Ottawa, Quebec City and Montreal held a massive demo on February the 10th, 2017 in Ottawa the capital of Canada against the rapes, extra judicial killings and the many arrest currently going on in West Cameroon.

The protest which seems to be the most power Cameroonian protest was aimed at informing the Canadian authorities about the Southern Cameroonian crisis and to table petitions to selected institutions. The hundreds of peaceful protesters visited the French and British embassies; the UN office as well as the Canadian parliament. Signed petitions were tabled to these institutions.

Addressing the Southern Cameroonian protesters, the representative of the UN office acknowledged receipt of the petition to her office and thank them for bringing the matter to her office in a peaceful protest. She promised to put an ear on the petition.

By Gabriel Tambe in Toronto