The Southern Cameroonian law enforcement officers have begun enforcing the 2017 decree by the USA-based Interim Government which considers that any Southern Cameroonian who participates in any proscribed election in the newly minted country will face the death penalty.

The country’s law enforcement agents are busy at work, keeping an eye on all those who brazenly violated the law in a fake election organized by the crime syndicate that has ruled the country for 38 years.

A day after the fake elections organized by the corrupt Yaoundé government, a Widikum councilor was brought down for violating a law inspired by God.

Yesterday in Buea, three traditional rulers who thought they were above the law were taken into preventive custody where they were questioned about their devilish intentions to permanently keep Southern Cameroons in the exploitative grip of the CPDM crime syndicate. 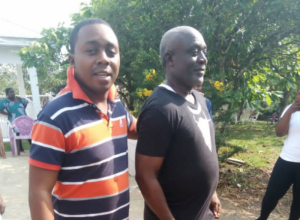 Chief Ewule supported by his lawyer

The traditional rulers had not only violated the law by stepping out to vote, they had committed treasonable felony by voting for the crime syndicate that has exploited Southern Cameroons for decades.

One of the criminals did not survive the soft questioning by professional and seasoned Southern Cameroonian law enforcement agents.

Having been suffering from hypertension and a heart problem, the criminal, who has escaped Southern Cameroonian justice, gave up the ghost while in custody.

He will however be tried in absentia. In Southern Cameroons, the law is the law and anybody who contravenes the law must face its full wrath.

The two other criminals were released yesterday after posting bail. They will be visited from time to time by law enforcement agents to ensure they do not skip town.

Southern Cameroonian laws are working and anybody who thinks belonging to the crime syndicate is enough protection is just deceiving himself.

It must therefore be underscored that all the culprits and enablers of the corrupt Yaoundé government resident in Southern Cameroons will be rounded up and punished according to the 2017 decree issued by the USA-based Interim Government.

According to the fighters on the ground, more deaths have been scheduled and law enforcement agents are busy enforcing the law.

Southern Cameroonians had been duly warned and the law is no respecter of persons.

In a previous voice note sent to the Cameroon Concord News Group prior to the charade called elections by Southern Cameroonian fighters, the fighters had clearly made their intentions known.

As the Yaoundé government pressed on with its diabolic plan to perpetuate dictatorship, corruption and marginalization, Southern Cameroonian fighters were also gradually putting in place a mechanism to ensure that Southern Cameroons gained its independence.

A fighter who spoke to the Cameroon Concord News Group’s London correspondent on condition of anonymity said that all the factions were quietly working together, adding that they were gradually putting their differences behind them; an action that was enabling them to put in place a tough mechanism that would enable them to monitor all those who would be voting in a proscribed election.

The fighter added that there was a silver lining emerging on the dark cloud of division that had given army soldiers the feeling that they were winning the war.

He advised that the slaughtering of three army soldiers in Ekondo-titi prior to the charade was just a clear statement of intent, adding that more killings of Yaoundé government officials were in the offing.

He stressed that the Yaoundé government had used all its resources to divide Southern Cameroonians but its efforts were not yielding the fruits the government was looking forward to.

“We move sophisticated weapons into Cameroon with relative easy. We have struck fear in the minds of the officials and soldiers and most of them are looking forward to the day this nightmare will be over,” he said.

Yesterday’s voice note clearly stated that chiefs, fons, senators, members of parliament, mayors and municipal councilors would be targeted for their role in enabling the corrupt Yaoundé government.

Another fighter, who elected anonymity, said that anybody in Fako Division who thinks that sending people of Northwest decent out of the Southwest region was the solution was simply mistaken.

He stressed that the fighters would mount pressure on chiefs and fons who have turned their backs on their people until they flee Southern Cameroons.

“These traitors are no longer worthy of the people’s confidence. They have sold their souls to the enemy and they do not deserve to inhabit our land,” he stressed.

In the coming days, we will be conducting a clean-up campaign against our traitors. Anybody who voted must lose sleep. They have violated the law of the land and they all know they are facing the death penalty, he underscored.

“We cannot let these infidels to keep on walking around as if they are lords. We have ensured that fake politicians like Peter Mafany Musonge, Yang Philemon, Dion Ngute, Elvis Ngole Ngole, Atanga Nji, Achidi Achu, George Tabetando and their surrogates do not come to our land to display their ill-gotten wealth. They know what would befall them if they dared to go to their villages. The death penalty still stands and the law is the law,” he said.

“Our colleagues in Mamfe are already on the trails of their preys and in the days ahead, we will be delivering good news. Our colleagues who are watching over the city of Bamenda are also manufacturing good news and Southern Cameroonians will be proud of us. We must get even with these political prostitutes who think more of themselves and less of the people,” he concluded.