Ever since French President, Emmanuel Macron, expressed his frustration with the Yaounde government’s inability to address the issues that have triggered the fighting in the country’s English-speaking minority, the relationship between the two countries seems to be falling apart. The Ngarbuh Massacre seems to be the tipping point. The French have repeatedly called on the Yaounde government to explore other options, but the Yaounde old regime seems to be stuck in the past.

In the government’s opinion, only military violence can bring about peace in that part of the country. Unfortunately, after close to four years and billions of dollars poured into the fighting, the situation has only gotten worse, with the country’s economy taking a nosedive.

No man will continue to support a bad child until his death. If a child chooses to be ineffective, he must be cut out at one point and this is what appears to be playing out between France and its struggling former colony – Cameroon.

The French have stood behind the corrupt and ineffective government ever since the fighting in Cameroon started. The corrupt government’s insistence on using violent military action to wrap up the insurgency and its establishment of tribe-based militia to kill thousands of people in the two English-speaking regions have turned out to be the wedge that will separate it from its French masters who now believe that at 87, Paul Biya, Cameroon’s second president, clearly belongs to a different and distant epoch.

It takes a lot of courage and determination to speak the truth in public. The French are noted for their diplomatic double-speak and nobody could imagine that Emmanuel Macron would speak about Biya in such despicable and demeaning language. The cat is out of the bag. The Yaounde government has not only been receiving money from Paris, it has also been receiving firm instructions from the Elysee Palace on how to run the country.

Generally, in Cameroon, demonstrations are not tolerated. But since Monday’s demonstrations were organized by regime surrogates, there was no tear gas and no riot police to beat, maim and kill peaceful protesters. The Yaounde regime has simply evolved from a struggling democracy into a full-blown dictatorship that has no regard for human rights and human life.

The disappointment of the Yaounde government is so glaring that even Cameroon soldiers of Beti extraction could be seen trampling on the French flag right in front of the French Embassy. This has touched some raw nerves in Paris and many French officials are already talking of sanctions against the Yaounde government that has reluctantly been talking of its sovereignty. Indeed, there is no love lost between France and Cameroon. 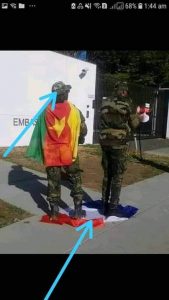 This faux-pas made by the Yaounde regime will certainly cost it a ton of money and its reputation. Its leading donor and backer, France, is angry and there will be consequences for Yaounde’s refusal to obey instructions from the Elysee on how to deal with the Southern Cameroons crisis.

The government is aware of this and government ministers have been working overtime to see if things could be repaired before they get out of hand. Cabinet ministers in Yaounde have been calling their contacts in France to see if they can help repair the damaged relationship.

A source at the Unity Palace in Yaounde said that the Presidency has been transformed into a call center, with government officials working the phones all day long in a bid to find a genuine solution to the situation that has left cracks on the Franco-Cameroon wall of unity.

But the French are not buying into whatever excuses President Biya’s ministers are giving. Paris wants a sustainable solution to the Southern Cameroons crisis that has torn the country apart. It also wants the country’s authorities to find a solution to the socio-political crisis that was triggered by the fake presidential elections in 2018 which gave Mr. Biya another 7-year term.

Paris needs genuine solutions and not cosmetic arrangements which have become the hallmark of the beleaguered Yaounde regime.

The French president is sick and tired of being embarrassed everywhere he goes. He is being accused of aiding and abetting the criminal regime in Yaounde and this is not reflecting well on him, especially as a leader whose democracy is predicated upon democracy and human rights.

The French will be going to the polls sometime next year and the French president wants to go into the polls knowing that he has no blemishes on him. Cameroon’s multiple problems have become another Coronavirus and Mr. Macron wants to distance himself from this virus that might mar his re-election next year.

For the moment, the French are focused on finding a more viable option to Mr. Biya. He has fallen short of the international community’s expectation and he must be made to leave the political scene which should be full of young energetic Cameroonians who can engineer real and long-term solutions to the issues facing the country.

The world does not need leaders who are driven by their egos. The world needs leaders who can display a lot of flexibility when faced with tough challenges. While Mr. Biya may be the head of the corrupt regime, the crowd around him must be axed too as those are some of the people who are spreading extremism and ordering the killing of other young Cameroonians just because they want to perpetuate themselves in the corridor of power.

The cleanup will be challenging, but it must be done if Cameroon, Central Africa’s engine of growth and stability, must know long-lasting peace. The journey ahead is long, but everything is doable. With Kamto eroding the government’s credibility abroad and Southern Cameroonians sapping the economy of its vitality, it is clear that before long, the Biya regime will be on its knees just like its wobbly economy.

Cameroonians must continue to pile the pressure on the crumbling government. With the French walking away from the establishment, it is obvious that Mr. Biya and his people will soon be in the disgraceful past.

World unprepared for future pandemics if inequalities not tackled