The so-called main opposition party in Cameroon, the Social Democratic Front of Ni John Fru Ndi has announced a boycott of national day celebrations slated for May the 20th 2017. The SDF reasons for the SDF action  are contained in a communiqué issued on Monday, May 8, 2017 and signed by the National Chairman Ni John Fru Ndi.

In essence, the socio-political crisis that has rocked Southern Cameroon over the last seven months led to the decision taken by the last SDF National Executive Committee. The party of Ni John Fru Ndi demands the release of all demonstrators including the leaders of the Cameroon Anglophone Civil Society Consortium incarcerated in French Cameroon prisons, a return to federalism and the organization of a national dialogue for the reform of the Constitution.

Our chief political commentator however opined that the SDF move was as a result of the electoral victory of Emmanuel Macron in the French presidential elections. The SDF has now openly cited with the Cameroon Anglophone Civil Society that has legitimate authority in Southern Cameroons.

Attached here is the SDF press release in which Ni John Fru Ndi explains why his party will not take part in the traditional civilian and military parade marking the feast of national unity on May 20: 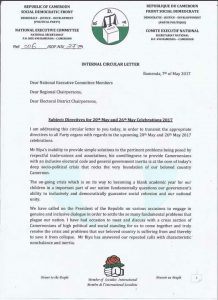 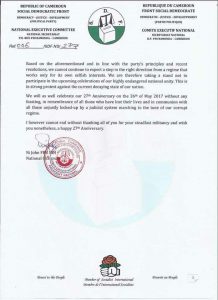