The President of SOBA-UK, Ayuk Akoh-Arrey has reacted to media reports in Cameroon on the bill of health of the Sasse Old Boys Association, UK chapter. In the following conversation with our Editor-in-Chief, President Akoh-Arrey says SOBA UK is not facing any crisis but some small difficulties from disgruntled Sobans most of whom are not even registered members.

CIR: Mr President thank very much for your time. Can you tell our readers something about yourself?

Ayuk Akoh-Arrey: Thank you for the opportunity to explain what is happening with SOBA:UK. I am Ayuk Akoh-Arrey, President of SOBA UK since 2014. I came to the UK after my A-Level from St Joseph’s Collage, Sasse via a British Council scholarship. I was in Sasse College from form 1 to Upper Sixth and got a solid grounding of the Sasse spirit, contributing in my day as a school prefect, school footballer and school band member. I receive a prize as best Maths student in my final year. My education to date has seen me become the first Cameroonian Actuary in the UK, that is a Fellow of the Institute and Faculty of Actuaries. My career has progressed through blue chip firms as a very senior manager heading departments, leading people and analyzing financial risks worth billions of pounds. I have good and bad experiences in my life in the corporate world but I always strive to be the best I can in an exclusive European professional environment. A former boss once described me as a rough diamond because I am serious and I always deliver when it matters.

CIR: Cameroon Intelligence Report came here to talk about SOBA, the Sasse Old Boys Association. Talk us through your history in this much respected ex-student’s association in the UK.

Ayuk Akoh-Arrey: After 15 years of living in the UK I attended my first ever SOBA:UK meeting in 2003, and the guys there at the time, mainly younger Sobans liked my enthusiasm and contribution. There was an election later that year I remember and I was just watching the proceedings from the sidelines and when it came to who should keep the money, which is the post of Treasurer, the guys put my name forward. There were no opposing candidates so I was made the Treasurer. I accepted the responsibility and we and other executives set about building the association. When the accounts were handed to me I noticed that it had about a £1,000 in it but it was such a small group back then that not much would have been expected.

CIR: What changes did you bring into the association as a treasurer?

Ayuk Akoh-Arrey: We started doing conventions in 2004 – The first was in Lambeth Hall – it was successful and then in 2005 we had a convention at a member’s house in Essex. I remember the church service by late father McCarthy was held in the member’s garden. We were very small in number but then we said we will grow by being smarter and ambitious, building membership and the brand name. 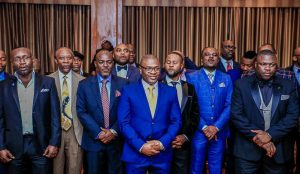 CIR: You may not agree with me but newspaper reports back home in Cameroon have hinted of a crisis in SOBA UK. Our readers would love to have an understanding of the situation

Ayuk Akoh-Arrey: I am firstly deeply disappointed with Sobans who have taken any issues they have to the media in Cameroon and worldwide. Most of the narrative provided is false but our trusted members are not fazed by these fabrications. We are a fraternity and that shows how reckless these individuals are. We do not have any crisis! We simply have some difficulties with a few disgruntled Sobans most of whom are not registered and don’t want to follow the rules of the association. A senior Soban called Dr Aloysius Mbako wrote a letter to me with his grievances but then he posted it on social media and made claims which were borne out of his lack of understanding of how the association functions. Soban Aloysius Mbako in particular, has never attended a General Assembly meeting, and didn’t care to establish the facts before writing his letter in which he called for an extra-ordinary meeting, an act which is not permitted in our constitution. Please permit me to describe to you his level of subversion for a Senior Soban who should know better. It is like having a retired civil servant calling a constitutional council of a nation state and inviting the president and the ministers to come along and listen to the deliberations. In support of such subversive acts was also a posting by Edwin Ngwafor to a Soban forum (the son of the President General of SOBA in Cameroon) also instigating a revolt. This makes you wonder why Sobans living in Cameroon are meddling in SOBA:UK matters. A General Convention Assembly meeting has been called by the executive for 11th November, 2017 which is the appropriately constituted meeting for members to attend and discuss their grievances. The Executive team hopes to see all members there.

CIR: SOBANS are aware of the personal sacrifices you made for the Sickbay project. Where is the negative campaign against you now coming from?

Ayuk Akoh-Arrey: In 2014, SOBA-UK had an election. Frankly speaking, I had no interest to be president and entered as the treasurer, but in the course of that campaign, the president decided to pull out of the race for family reasons and I was encouraged by the team to stand as president. After considering the issue and speaking to my friends and family I accepted the challenge and was eventually elected President of SOBA-UK. When I took office, I wanted to change a few things. In particular, how we engaged in capital projects, which can incur significant cost such as the Sickbay project.

In 2013, Prof Ephraim Ngwafor became President of SOBA in Cameroon and the Sickbay project became a hot issue. Mr. Joki Manga, who is a Vice of SOBA President in Cameroon, wrote an article relegating SOBA:UK from the main owner to a sponsor, and together with SOBA in Cameroon they renamed the project and took ownership of it. Despite all this they still wanted money from SOBA:UK to complete the project which could run into tens of millions CFA.

CIR: Can you give us an insight into some of the things you wanted to change?

Ayuk Akoh-Arrey: The hijacking of the sick bay project by SOBA in Cameroon meant we needed an MOU (Memorandum of Understanding) with the proprietor to be able to continue injecting huge amount of funds into the project. A change was that the executive agreed that large capital projects must be accompanied with signed contracts of understanding, so that the aspirations of the project can be delivered without unwanted issues.

I secured the MOU with the Bishop – His Grace Immanuel Bushu with both of us signing the contract as the main owners of the Sickbay project, with SOBA America mentioned as our co supporter. This would have allowed me to bring a motion to the SOBA-UK General Assembly to authorize funds for the Sickbay project. With this MOU the Bishop and the College would have received funds. To the surprise of many, Prof Ngwafor and his team got the Bishop to cancel the MOU. I was never contacted by the Bishop or his office to explain his decision. As a result of these actions, in 2016 the SOBA-UK members voted at their AGM to exit the Sickbay project. This decision has been recorded and minuted, but some sobans have continued campaigning for funds to be sent to project, or perhaps to take control of funds in the account.

CIR: I spoke to a member of your organization during a trip to Belfast and he observed that the problem in SOBA UK is that of electioneering. Is this true?

Ayuk Akoh-Arrey: Elections were called in July 2017 as was agreed in the 2016 AGM after we recorded a delay at the meeting and accepted an action to call the elections in the 2017 year. Some of the sobans within the vibrant association had failed to renew their membership. Some of them came to register only after my administration had announced a date for the general elections. Interestingly, the SOBANS who were now acting like an opposition wanted to renew their membership after the deadline of 31st December 2016. My administration made it clear that we could not accept registrations only for the purpose of voting especially in the month of July and August, the last two months of the financial year. The election took place within the rules and regulations of SOBA-UK. There were no opposing candidates.

But Mr. Agbaw-Ebai the team elected is the strongest I have seen in all my time in SOBA-UK. I have confidence they will do great job over the next 2 years. I entered as president after receiving very strong support from a strong base of registered members. They felt that it was fair for me to have a deserving second mandate given the financial and brand success that had been achieved, and crucially in the absence of anyone else willing to step up to the challenge. You can see the heat that the SOBA:UK president has to put up with, which tells you that it is a challenging voluntary job for anyone.

Going back to your question, there is a small group of people who are now working to destroy SOBA-UK. Our strong base of registered members will not allow that to happen, and the new executive are very capable of moving things forward. In addition, if there are elements of SOBA in Cameroon seeking covertly to instigate a revolt as I mentioned then they should truly stay off SOBA:UK affairs. 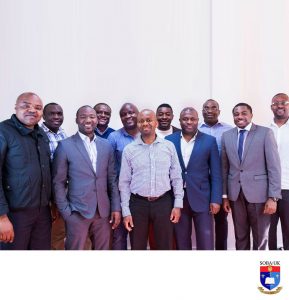 CIR: Do you still believe you are the right man to move SOBA UK forward?

Ayuk Akoh-Arrey: Of course, without mincing words!! In my time as president, SOBA-UK has enjoyed incredible financial success from the frugal management from me and my team. We have built a very strong brand in the UK and the money in our coffers has become very attractive. Our members feel empowered to reach new heights. We are a voluntary association of members and I am confident that our members will see great benefits especially the younger sobans of today. We continue to have St Joseph’s College on our radar and will recalibrate the support we provide and overall SOBA:UK will be great for its members.