A very disturbing story is developing from Kumbe Balindo, Ndian Division in the South West region that two little boys, aged 7 and 10, have reportedly raped and killed a 1 year old girl. CIR sources in Mundemba, capital of Ndian Division reported that, after the act the two boys forced the girl into a pit toilet and then used a stick to hit her to death.

Even with the presentation of the two kids to the public earlier today by the forces of law and order, Cameroon Intelligence Report staff man, Cham Victor Bama quoted a traditional ruler of the area who opined that the young boys cannot get an erection and are also not capable of destroying the late baby’s private as the medical reports indicated.

There are suggestions that someone is using the children to hide a ritual crime. The bad news is that the two boys have admitted throwing the little girl in the toilet and killing her whilst she was in there. 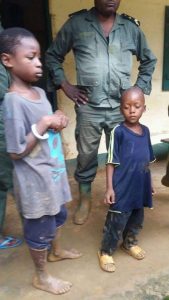