Cameroon People’s Democratic Movement (CPDM), the country’s ruling party has swept an overwhelming majority of seats in the senate after the March 25 polls.

According to official results from the elections body, ELECAM, CPDM won 63 out of the 70 seats available. The remaining seven seats went to the main opposition, Social Democratic Front (SDF).

CPDM won in nine out of the ten regions of the central African country with the SDFwinning only in one of the Anglophone regions – the North West. Seven other parties failed to win a seat.

Cameroon’s parliamentary system caters for 100 senators out of which 70 are to be elected by municipal councillors across the country. The remaining 30 slots are the prerogative of the president. 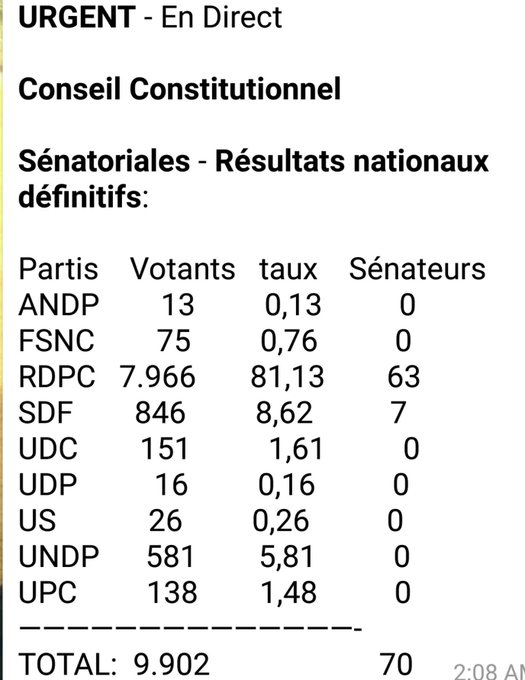 The senatorial elections marks the start of a busy electoral calender as it is set to be followed by council, legislative and presidential elections later this year. The respective dates are yet to be determined by the President.

President Paul Biya is expected to seek another term in office after over three decades in charge. The country is currently riled by secessionist elements in the Anglophone regions – northwest and southwest regions.

The secessionists have entered an armed phase of a struggle for independence. About twenty five security forces have so far been killed in guerilla style attacks. Government received over 40 separatist members deported from Nigeria, they included leader Sisuku Julius Ayuk Tabe.