Rigobert Song and the ruling CPDM party: The AGBAW-EBAI DEBATE

The former captain of the Indomitable Lions of Cameroon, Rigobert Song was shown recently on national television with a cap on his head identifying him as a member of the ruling CPDM crime syndicate. On Sunday the 20th of August 2017, Rigobert Song was among some pro Biya Southern Cameroons comedians who attended the final of a holiday football tournament in the Mbengwi county organized by Mbah Acha Rose, the French Cameroun Minister at the Presidency in charge of State Control. 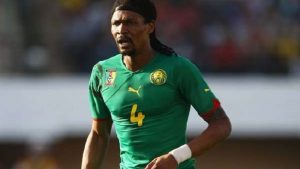 Rigobert Song, the emblematic figure of the indomitable Lions and an international icon appeared in public with a cap bearing the effigy of the ruling CPDM party. He remains a French Cameroonian citizen so he is free to militate in any political party of his choice. It is clear to Cameroon Concord News Group that this must have a number of implications.

From the moment you take a political color, you are removed from the world of sports which is apolitical and which is a place of reference and a meeting point for both French and British Southern Cameroonians. In this edition of The AGBAW-EBAI DEBATE, we are asking our readers to give their respective take on the Rigobert Song CPDM hat affair.

The AGBAW-EBAI DEBATE is a Cameroon Concord News Group Production