Meanwhile the killings yesterday in Southern Cameroons provoked a series of phone calls between the White House and the UN department for prevention of genocide. The UN Secretary General was briefed and he has arranged a meeting with the French Cameroun 85 year dictator, Paul Biya before he leaves New York. 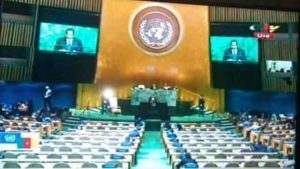 Following the action by world leaders to boycott President Biya ‘s speech due to the massive human rights violations his regime has carried out, the President of the 72nd UN General Assembly has created a Special Commission to look into the Southern Cameroons case.

Written for CIR by Neba Nathan