President BIYA, has launched the 10th edition of the Women’s Africa Cup of Nations. Biya made a brief statement on Saturday 19 November 2016, to open the football tournament, at the Yaounde Omnisports Stadium. The 83 old leader watched as the Indomitable Lionesses thrashed Egypt by 2 goals to nil. 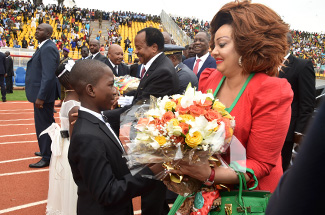 This event was also graced with the presence of the First Lady, Mrs. Chantal BIYA. Over 40,000 football fans welcomed President BIYA and the First Lady upon their arrival at the stadium. This was followed by a spectacular artistic performance characterised by; the anthem of the competition, and a cultural display that exhibited Cameroon’s cultural diversity and the country’s evolution toward an emerging economy.  The Indomitable Lionesses of Cameroon were left with no option than to lock horns with their Egyptian counterparts. 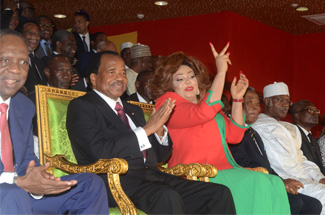 Cameroon carried the day with a 2-0 scoreline. Star striker Aboudi Onguene Gabrielle opened the curtains with a slicing header at the 25th minute. Team captain Manie Christine Patience sealed the victory with a penalty at the 73rd minute.

President Paul BIYA’s determination for Cameroon to host the 2016 Women’s AFCON has been greatly appreciated by Cameroonians. Fans will equally be thrilled with the Men’s AFCON in 2019. The hosting rights of these competitions were won through the Head of State’s appealing diplomacy.