Adolphe Lele Lafrique, the Francophone Governor of the Northwest Region has made a human and material assessment of Thursday’s December 8, 2016 deadly clashes in Bamenda.

A sister publication Cameroun Info.net with strong links to the regime in Yaoundé reported that the governor sent his report to the Presidency of the Republic for the attention of the Cameroonian dictator, President Paul Biya and copied the controversial  Minister of Communication and Cameroon government spokesman.

Cameroon Intelligence Report senior political commentator observed that the document was written in a pattern indicating that British Southern Cameroons was a colony of La Republique du Cameroun and the French colonial administrator, Governor Adolphe Lele Lafrique was reporting to the French Commissioner for French Cameroons, President Biya. Attached here is the report written in French: 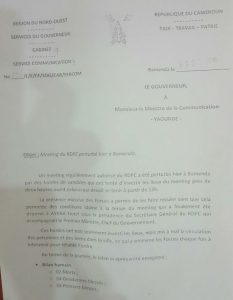 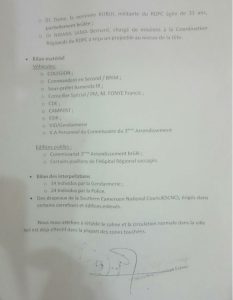