Chantal Roger Tuile, journalist and editor of the newspaper “La Tribune de l’Est Econonie” has revealed that the National Social Insurance Fund is on the verge of collapse due to waste of financial resources by the current administration headed by Noel Alain Olivier Mekulu Mvondo Akame.

Chantal Roger made the revelation during a televised conversation aired by Equinox TV today Sunday, August the 27th 2017. The host of the program had invited him including some other senior Francophone personalities to speak of their professional life. However, Roger Tuile went beyond by invoking a massive fraud and mismanagement scheme at the National Social Insurance Fund. 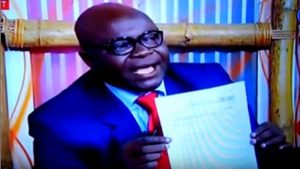 His submission was indeed a continuation of a series of write-ups his newspaper had made against the general manager of the National Social Insurance Fund. Chantal Roger Tuile brandished documents as evidence supporting his claims that the current GM of CNPS was squandering public funds.

Among the documents he made public live on television were receipts of payments made to an airlines company that transported Mekulu Mvondo Akame and his friends to Spain to watch an el clasico FC Barcelona against Real de Madrid at the expense of the National Social Insurance Fund.

He also denounced Roger Milla who allegedly received 500,000 CFA francs from the CNPS through the accounting department.

By Soter Tarh Agbaw-Ebai with files from CIN