A fantastic scene occurred on Tuesday, December 27, 2016 at the crossroads of Bonakouamouang in Douala, the economic capital.

It all began when popular anti French activist André Blaise Essama appeared at the main round about and implanted a statue of the late Dr. John Ngu Foncha, an emblematic figure of the struggle for the Anglophone cause and the father of reunification who died on April 10, 1999 at the age of 82 . Immediately, a large crowd gathered on both sides to admire the sculpture.

Alerted, the police disembarked on the spot and destroyed the monument. A resistance put up by André Blaise Essama seriously disrupted traffic. After a scuffle, the activist was forced to abandon the sculpture to the police. The men in uniform, however, had a hard time to transport the monument which was so heavy. André Blaisse Essama went away Scot-free and promised his numerous fans who chanted his name at the top of their voices to return with another statue.

The nationalist activist who has the reputation of destroying monuments dedicated to French settlers was released from prison only three months ago. He had spent six months in the New-Bell penitentiary in Douala for vandalizing General Leclerc’s monument in the Bonanjo neighborhood. 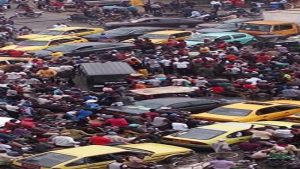