“His Royal Highness, the Paramount Chief of Mamfe and members of the royal family announce with very great sadness the death of Queen REGINA AYAMO OBEN,” a statement from the Mamfe royal palace” had said. The nation gave her a befitting burial on Saturday the 1st of October 2016. An educationist and a devout Roman Catholic had passed to eternity.

Born REGINA AYAMO, she was the widow of the patriarch of Mamfe, the late Thomas Njang Oben of the Cameroon Development Corporation, CDC and reigned until her sudden death on Monday the 5th of September 2016. A Mamfe royal statement said she died in Yaounde. The Paramount Chief of Mamfe, His Royal Highness Chief Godson Oben said Mamfe would remember a great woman who will forever be part of the history of the Manyu nation while, Prof, Ephraim Ngwafor observed that the South West region would now mourn her passing. Indeed a page in our country’s education and tourism history has turned.

Her Majesty, Regina Ayamo Oben was an iron lady. When her husband passed away, only two of her offspring: Charles and Victor Oben had graduated from University and returned home. She withdrew from the public eye after the death of her husband in 1987 and concentrated on the Victoria Guest House-a family business she and her husband had established. To have kept the Sacrament of Matrimony since 1987 and successfully raised up a cream of prominent Manyu elites is something our nation will never forget.

The imposing Roman Catholic Cathedral hosted the requiem mass that was celebrated on October 1, 2016.  Queen REGINA AYAMO OBEN aka, Mami Victoria Guest House was laid to rest at the Mamfe royal cemetery in Coconut Island in Small Mamfe. She produced children that Cameroon as a nation cannot ignore:

Charles Oben: A senior graduate from the University of Sunderland with an MA from the University College London. Was head of Procurement at Pectain Cameroon before moving to Shell petroleum in Holland in same capacity. He joined the United Bank of Africa as Head of Corporate Services and was very instrumental in setting up the bank’s branch portfolios in Francophone Africa. He is presently a management consultant resident in Lagos, Nigeria.

Barrister Victor Oben: UK trained barrister. He worked with Guinness Cameroon legal services and moved to Standard Chartered Bank Cameroon as Head of Human Resource. He was also the company secretary at the time former Prime Minister, Chief Inoni was board Chair. He is presently in charge of Finance and Human Resources at MTN Cameroon. He is married to Tricia Oben a long standing Cameroonian journalist.

Dr.Felix Oben: A medical doctor from the Yaounde University Teaching Hospital, CUSS, now running a private practice in the USA. 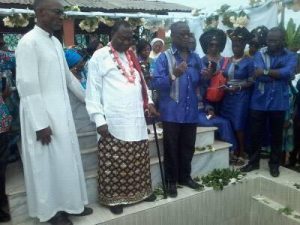