A leading rights group has condemned the use of excessive force by Kenya’s police, who violently dispersed opposition protesters in four major towns, including Nairobi, Monday. The Kenya National Commission on Human Rights (KNCHR) said it was “particularly dismayed by the gory scenes” witnessed Monday in Kisumu, Nairobi, Kisii and Machakos. It said demonstrators already subdued had been “subjected to gruesome violence by the police resulting in seriously bodily harm.”

The statement came after the emergence of pictures and videos showing that the riot police on Monday beat up opposition supporters protesting for election reforms ahead of polls next year. The KNCHR condemned police measures, saying that the act by the security officers constitutes serious violation of human rights, the constitution and rule of law.

In one incident that has stirred anger and condemnation across Kenya, a policeman is seen beating and kicking one protester who had fallen on a road curb in the chaotic scenes after police fired tear gas to disperse a crowd in Nairobi. Kenya’s police chief said officers intervened to curb “lawlessness,” but an internal inquiry would be held to look into the allegations against them.

“I condemn the lawlessness visited on the public by rioters yesterday and an internal inquiry is under way to determine whether any police officer broke any law while quelling the riots,” said police chief Joseph Boinnet. A group of 15 opposition supporters pleaded guilty in court on Tuesday to taking part in the illegal protest in Nairobi. They denied the more serious charge of being armed and breaching the peace. 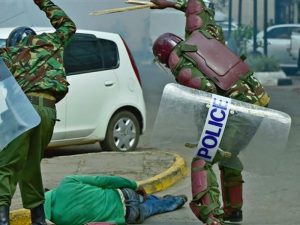 ‹ The 2014 Synod of Bishops: The Anatomy of a crisis › Adieu Papa Wemba