Gunmen attacked an upscale hotel complex in Kenya’s capital Nairobi on Tuesday, sending people fleeing in panic as explosions and heavy gunfire reverberated through the neighbourhood.

At least one person was killed and eight others were injured in the attack, hospital officials said. An AFP reporter said the death toll was at least five.

Al Shabaab – the Somalia-based extremist group that carried out the 2013 Westgate Mall attack in Nairobi that left 67 people dead – claimed responsibility for the assault and said its members were still fighting inside.

Kenya police chief Joseph Boinnet told reporters armed assailants could still be in the building and the police operation was ongoing.

The complex in Nairobi’s Westlands neighborhood includes a large hotel known as DusitD2, along with banks and offices.

Several vehicles burned. People were rushed, some carried, from the scene. At least one was on a stretcher. Some ducked behind cars, screaming. Others appeared to take cover behind fountains and other features in the lush outdoor complex.

“It is terrible. What I have seen is terrible. I have seen a human as I ran out and there is what looks like minced meat all over,” said one man who said he ran from the scene, Charles Njenga.

Another man, who did not give his name, said he hid in an office.

“I have been hiding. My colleagues were running everywhere,” he said, breathing heavily. 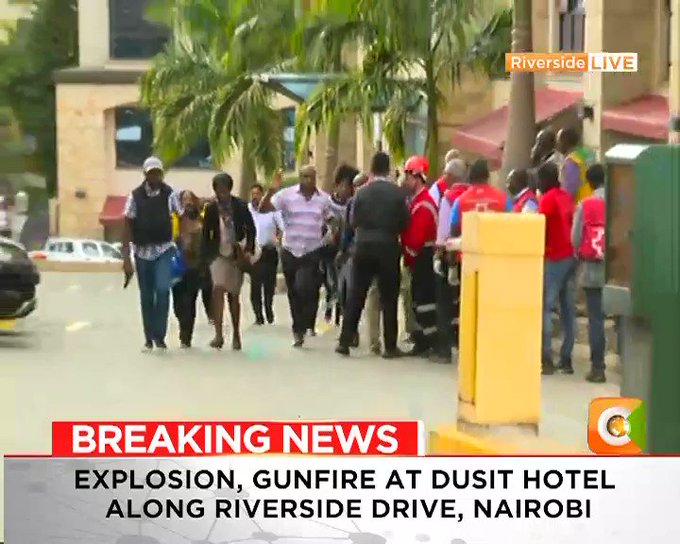 Another witness, Robert Murire, said he saw at least two bodies at the scene, along with attackers wearing green and wrapped in ammunition.

It was not clear how many attackers took part.

Gunfire continued several minutes after the first reports as ambulances, security forces and firefighters rushed to the scene. Black smoke rose from the complex. A bomb disposal unit arrived, and vehicles were cordoned off for fear they contained explosives.

Police said they detonated a car that had explosives inside. An unexploded grenade was also seen in a hallway at the complex.

What appeared to be plainclothes security forces inched their way toward the scene, guns in hand.

“We have sent officers to the scene, including from the anti-terrorism unit, but so far we have no more information,” police spokesman Charles Owino said.

A large group of women were hurried out by security forces, one woman still in curlers. Dozens of others were hurried away as plainclothes officers went shop to shop in the complex. Some people held up their hands to show they were unarmed.

Al Shabaab has vowed retribution against Kenya for sending troops to Somalia since 2011. The al Qaeda-linked group has killed hundreds of people in Kenya, which has been targeted more than any other of the six countries providing troops to an African Union force in Somalia.

The attack immediately reminded many Kenyans of the Westgate Mall attack, when al Shabaab extremists burst into the luxury shopping center, hurling grenades and starting a days-long siege.

The hotel complex under attack is less than 2 kilometers from Westgate Mall and is in what is considered one of the most secure areas of the city. It lies on a relatively quiet, tree-lined road near a main avenue. Its website says it is “cocooned away from the hustle and bustle in a secure and peaceful haven.”

The attack came three years to the day after al Shabaab extremists attacked a Kenyan military base in Somalia, killing scores of people.