Eden Hazard scored twice in what was likely his last match for Chelsea to fire his team to a 4-1 victory over Arsenal in an all-English Europa League final in Baku on Wednesday.

If this was goodbye for Eden Hazard and Maurizio Sarri, then it was a stylish farewell.

For Petr Cech, it was the worst way to retire after a legendary career.

Hazard scored twice past his former teammate as Chelsea sliced through Arsenal in the second half of the Europa League final on Wednesday, netting four times in the space of 23 minutes to win 4-1 in a London derby played far from home.

The Belgian star then indicated that he is likely to leave the club this summer, amid widespread speculation about a move to Real Madrid. 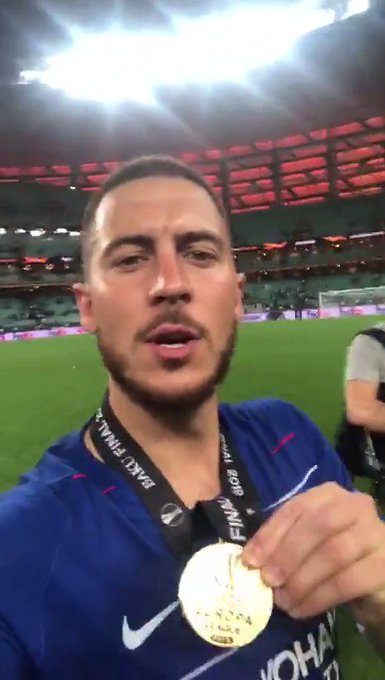 “I don’t know yet, I think we will decide in a few days,’ the Belgian star said. ‘My target today was to win the trophy, that was it, that was the only thing on my mind.

“I told my decision two weeks ago and now it depends on the club, both clubs. I am just waiting like the fans wait so you will see, you will know in a couple of days.

“I think it is a goodbye but in football you never know.”

After a drab first half, Chelsea took control in the 49th minute when Olivier Giroud met Emerson’s pass with a diving header into the net.

It was the French striker’s 11th goal in 14 games in the Europa League this season, but he barely celebrated against his old team, kneeling with palms raised as his teammates mobbed him. 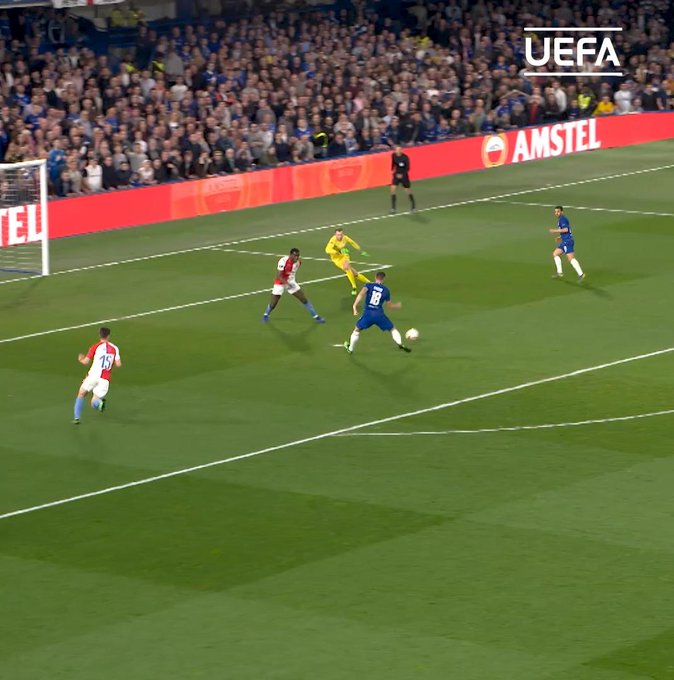 Pedro doubled the lead when he found space in the penalty area in the 60th to stroke in a cut-back pass from Hazard.

It was soon 3-0 when Hazard converted a penalty after Ainsley Maitland-Niles — the only English player to start the all-English final — shoved Giroud in the box.

Two minutes after coming off the bench, Alex Iwobi punished Chelsea for a poor clearance with a volley from the edge of the box to make it 3-1 in the 69th.

But Arsenal’s hopes of a comeback were extinguished three minutes later when Hazard and Giroud teamed up again.

Hazard first passed the ball to Giroud and then knocked his flicked cross past Veteran goalkeeper Cech.

Speaking on the pitch shortly after the final whistle in Baku, Hazard said, ‘It was good. In the first half I think both teams had a bit of stress because it was the final, it is something big for both teams, but when Oli scored it was the beginning of a great night. We played well second half, they had a few chances at the end when the score was 4-1 but we controlled the game. I am just happy to lift this trophy with the boys.

Facing the team where he spent his best years — and is expected to return this summer in an administrative role — Arsenal’s Cech made good saves from Hazard and substitute Willian to stop Chelsea humiliating the north London club further.

It was the first trophy for Sarri, the Chelsea coach who did not rule out leaving the club Tuesday when asked about the vacant Juventus coach job, after falling out with sections of the club’s fans.

It was the first Europa League final to have the video referee system, but referee Gianluca Rocchi never made use of it.

That aggrieved Arsenal’s players and fans early on when Alexandre Lacazette collided with Chelsea goalkeeper Kepa Arrizabalaga but no penalty was given.

With several thousand empty seats and only around 6,000 fans from England, the atmosphere in the stadium struggled to match that of a typical European final.

Arsenal and Chelsea fans had complained of the high cost of travel from Western Europe, and even though locals and fans from elsewhere in the world made up the numbers, the atmosphere was subdued, even flat.

Livening up the Baku Olympic Stadium will be a tricky task for Azerbaijani’s organisers for the four European Championships game it hosts next year.