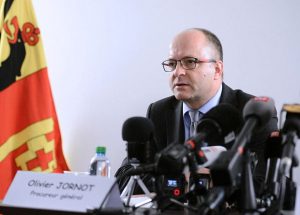 Geneva’s public prosecutor, Olivier Jornot slammed three and four month suspended sentences on five of Biya’s bodyguards on Wednesday for aggravated assault on Adrien Krause, a reporter for Radio Télévision Suisse (RTS). Swiss media reported that after reviewing security cameras, the judicial police in Geneva arrested six members of Biya’s entourage on Tuesday morning; but one woman carrying a diplomatic passport was later released. The other five who appeared before Olivier Jornot, had faced up to five years in prison if found guilty. The men were however handed suspended sentences.

Neither the Swiss foreign ministry nor Geneva police or the public prosecutor’s office would confirm the identity of the security guards arrested but Swiss foreign ministry spokesman, Georg Farago rejected reports that Biya’s security guards might enjoy diplomatic immunity. “The people accompanying the president do not have any particular status and must respect Swiss law,” he said. “Switzerland recalls that it is very attached to freedom of expression and of the press, and to the respect of the rules in public spaces,” Farago told the French news agency, AFP.

RTS reported that in the complaint filed with the Geneva judicial police, Krause detailed how he was brutalized and assaulted by Biya’s security guards while he was filming a protest by the anti-sardine brigade in front of the Hotel Intercontinental, where the 86-year-old Biya has spent over four years at the cost of $40,000 (FCFA 20 million) a day, since he inherited power in 1982; even as a majority of Cameroonians back home are scavenging for survival, RTS reported. Krause said he was immobilized, “roughed up” and the bag containing his professional equipment, as well as his wallet and mobile phone were seized. The items were only returned following intervention by the Swiss federal foreign ministry; and after Geneva’s diplomatic police got involved and Krause filed a complaint over the assault.

Following the assault, Switzerland summoned Cameroon’s ambassador in Bern, Léonard Henri Bindzi, and told him in very strong terms that the attack on the journalist was unacceptable. “Diplomatic procedures have been launched… Cameroon’s ambassador was summoned in Bern and the foreign ministry informed him that such incidents are unacceptable,” foreign ministry spokesman, Farago told AFP, adding: “Freedom of the press is protected and must be respected.”

In another reaction, the global media freedom watchdog group, Reporters Without Borders (RSF) condemned the attack and called on the Swiss and Cameroonian authorities to ensure it does not go unpunished. RSF’s Swiss section in a statement, urged the Swiss authorities to “take all necessary action despite the legal and diplomatic difficulties that might arise.”

“If presidential staff can attack journalists with complete impunity, including abroad, this would send a terrible message to those who try to report the news in both Switzerland and Cameroon,” said Arnaud Froger, the head of RSF’s Africa desk. “The diplomatic immunity enjoyed by the president does not apply to his bodyguards. Those responsible for this attack must be brought before the competent judicial authorities and must be punished appropriately.” Journalists are often subjected to attacks and arbitrary detention in Cameroon, which is ranked 131st out of 180 countries in RSF’s 2019 World Press Freedom Index. Switzerland is ranked 6th.

Meanwhile, the two officers of the Geneva diplomatic police who witnessed as the journalist, Krause was being attacked by Biya’s security guards, reportedly told investigators that they were afraid to intervene because while they carried batons, Biya’s security guards were armed with automatic pistols and confronting them might have escalated the situation; and provide an excuse for the bodyguards to fire their weapon and then claim it was “accidental discharge.”