It has been revealed that the French Cameroun administrative authority for the state of Manyu ordered the Francophone dominated police, military and customs officers to use their weapons against Southern Cameroons demonstrators on October 1.

Cameroon Intelligence Report gathered the prefect of Manyu in the Buea Province signed an order on September  the 23rd which was addressed to the various chiefs of squadrons in his locality. 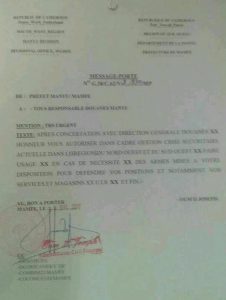 The message that was of course written in the French language and matriculated No / G38C362 No 3/330 / MP of 23 September 2017 stated that: “After consultation with the General Directorate of Customs, the Prefect has the honour to authorise in the context of the current security crisis in the North West and South-West, the use in case of necessity of the weapons placed at your disposal to defend your position and especially your services and stores.”