The former general manager of the Telecommunications Regulatory Agency, Jean-Louis Beh Mengue was recently arrested as he attempted to escape from the country after a first hearing of his case at the Special Criminal Court on the 19th of June 2017.

Jean-Louis Beh Mengue is facing trial for embezzlement and misappropriation of funds during his time as head of the Telecommunications Regulatory Agency. He was reportedly arrested as he tried to cross over to the Republic of Gabon. In a correspondence addressed and dated the 31st of July to the legal authorities in Yaoundé, the Senior Divisional Officer for the Ntem Vallé, indicated the incident. 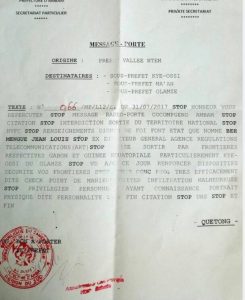 The Consupe report explicitly mentioned collection operations with the main mobile telephone companies. Orange and Mtn Cameroon were penalized for breach of specifications in their contracts. According to the lawyer of the former GM, Maitre Claude Assira, charges initially against his client concerned an alleged misappropriation of more than 18 billion FCFA. This amount was reduced, over the course of the procedure to just over 4 billion FCFA.

Divisional Commissioner Enyegue Mbolong, Head of the Investigation Division at Special Criminal Court and Attorney General, Aimée Justine Ngounou, have both announced in a joint statement made public on the 9th of June 2017, that all measures must be taken with a view to prohibiting Jean-Louis Beh Mengue from leaving the territory.