The Minister for Secondary Education has signed an order pretending to cooperate with the striking Anglophone teachers. The ministerial order appears to be a contingency plan by the Biya Francophone Beti Ewondo regime to reopen the schools. Cameroon Intelligence Report understands the decision made public by the Secondary Education minister offered a provocative concession to the teachers and also on job security for the 1000 young teachers to be recruited under a bogus scheme announced by the head of state.

The leaders of the Anglophone teachers’ trade unions have opined that if no progress was made in talks by the end of next week, the Yaoundé government should be ready for more violent strike actions. The ministerial order addressed only one of the 11 points advanced by the striking teachers. As if to say the Anglophone teachers could do nothing, the minister yet again published his press release only in the French language.

What the Francophone government had thought was a temporary solution to deal with the poor contingency plan would definitely not resolve the dispute which has closed nearly all schools in British Southern Cameroons. 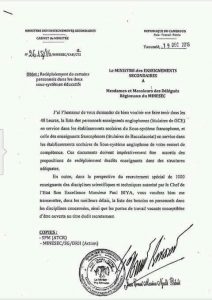