The Francophone Cameroonian community in Italy has warmly welcomed President Biya and his wife in Italy. They came in their numbers and joined Sergio Mattarella, President of the Italian Republic and gave the 84 year old dictator a befitting arrival ceremony in Rome.

Biya and Mattarella met in the afternoon yesterday Saturday, March 18, 2017 in Rome, the capital of Italy. Biya, accompanied by his wife Chantal Biya, were received on their arrival at the military airport in Rome by Italian officials.

Biya was applauded by many French speaking Cameroonians living in Italy and was escorted to the Rome Cavalieri Waldorf Astoria Hotel in the heart of the Italian capital by many members of the Francophone Cameroonian community in Italy, most of them militants and sympathizers of the ruling CPDM consortium of crime syndicates. 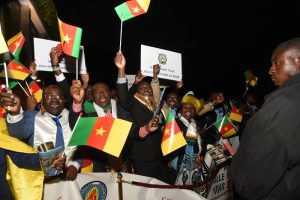