Football: Japan draw with Lions in 1st match of 2020

Japan lacked a finishing touch as they settled for a scoreless draw with Cameroon on Friday in the first match of the year for manager Hajime Moriyasu’s Samurai Blue.

The game was not only Japan’s first in a year disrupted by the novel coronavirus pandemic, but also the first made up entirely of overseas-based players — since players returning to their J-League teams would be required to quarantine for two weeks. 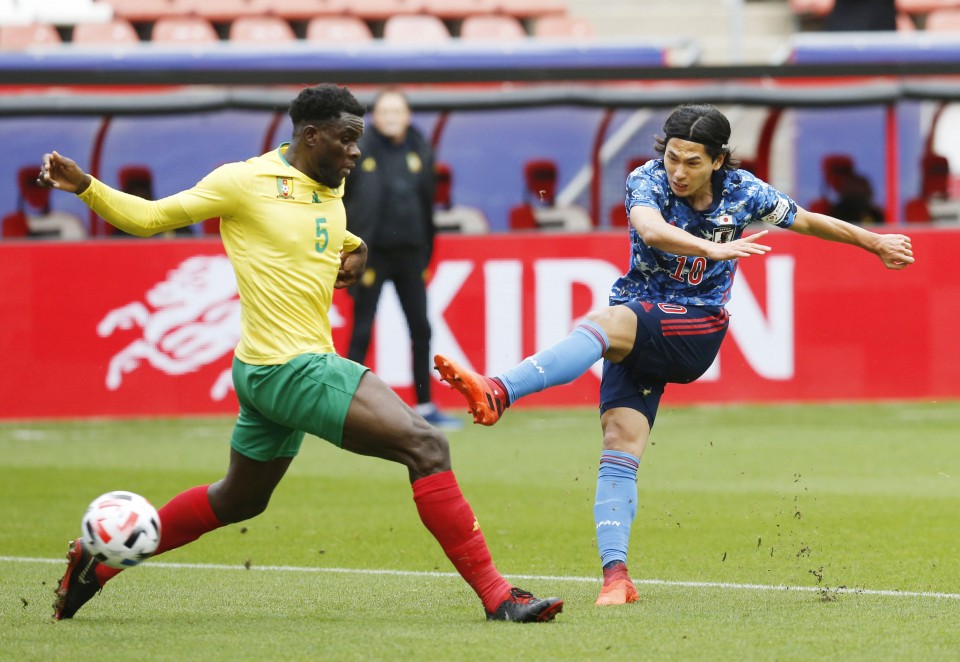 Takumi Minamino (R) of Japan shoots during the first half of an international football friendly against Cameroon on Oct. 9, 2020, in Utrecht, the Netherlands. (Kyodo)

Japan created numerous chances, particularly on the right wing through second-half substitute Junya Ito, but were unable to unhinge a Cameroon squad that defended in depth.

The 27-year-old midfielder for Belgian club Genk was a constant threat down the right side delivering one good cross after another into the box.

As if following script, 19-year-old wunderkind Takefusa Kubo took the game’s last shot only for keeper Fabrice Ondoa to finish his own outstanding game by tipping the free kick over the bar.

“I thought their wall was not positioned well, so I thought I would take a shot at goal,” said Kubo who joined Spanish club Villarreal this season and entered after the hour mark. “I hit it OK, but in the end their goalkeeper made a nice save.”

Moriyasu may not have been happy with the draw but was pleased with his players’ tenacity.

“It’s not a satisfactory result, and we had some tough spells,” he said. “But despite that, despite the frustrating moments, we never lost our composure or our cohesion and fought hard right until the end.”

“A highlight was being able to bring together a team of both older and younger players, and they bonded together in the face of a very strong opposing team. That is big for our development.”

The game was the first of two friendlies behind closed doors at Utrecht’s Stadion Galgenwaard, where Japan will take on the Ivory Coast on Tuesday.