A cream of legal experts defending the victims of the Eseka train disaster have revealed that they are going to open a lawsuit against the Bolore Group and Total who reportedly own 87% shares of CAMRAIL in a court in France, reports Cameroun Info.Net.

Barrister FRU John NSOH, who moonlights as the leader of the legal team made the revelation during a chat with Equinoxe Television. Said the man of law, “President Paul Biya, created a commission after people died in Eseka, that report I am told is on his table because he gave 30 days and the 30 days have elapsed, he has that report, what has he done on that report?”

Fru John Nsoh indicated that court action remains the only solution and that the legal team will not pay attention to manipulations or attempts to calm them, “I as the head of the legal team defending the deceased and injured victims I can assure you that we are not going to hear anything from this country because we know that the man who killed our people is so powerful .We are not expecting him to take any decision that will affect the rights of those who died and those who were wounded. So we are going ahead to defend them not only here but also in France where those who killed them come from. The people who run CAMRAIL are all Frenchmen, I want to make it clear here they are all Frenchmen and we have clients who are Frenchmen and who were wounded in that accident, so we are applying article 155 of the French Penal Code and we are going to go after that man, the man who owns 87% of CAMRAIL, group BOLORE together with TOTAL, we are not giving up and we will go to the logical end.”

The lawyers will be traveling to France next week with the case file together with their international partners. Barrister FRU John NSOH was actively involved in defending victims of the Kenyan Airways Mbanga Pongo incident. 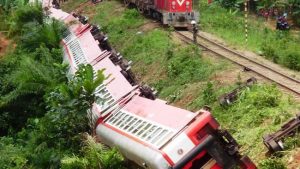