US ambassador to Cameroon, Michael Stephen Hoza including other top diplomats accredited to Yaounde have donated blood to save the lives of some 500 people who were seriously injured in the train accident at Eseka on Friday the 21st of October 2016.

State radio and television reported that the initiative came from the much respected ambassador Micheal Stephen Hoza after hospitals announced an acute shortage of blood for the treatment of wounded passengers. 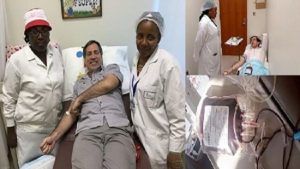 In a show of solidarity with the Cameroonian people, the ambassadors of Canada, France, Japan, Israel and the Resident Representatives of the United Nations, World Health Organization and the World Bank all took turns and donated blood.

Ambassador Michael Stephen Hoza who enjoys a good relationship with the Cameroonian dictator was quoted as saying that, the blood donated will be handed over to the Yaounde Emergency Centre, Yaounde Central Hospital, the Military Hospital and the Yaounde University Teaching Hospital.

A senior French government official serving with the French Ministry of External Affairs and International Development, Jean-Marc Ayrault who is on an official visit to Cameroon also took part in the process.