Authorities in Buea, capital of Cameroon’s restive South West region have cautioned the general public against the “ghost town” phenomenon.

According to the Lord Mayor of the Buea Council Ekema Patrick Esunge, the body will take punitive measures against economic operators especially who respect the most recent call for a ghost town.

In a press release dated Friday June 20, 2018; the Mayor stated that Monday (June 23) remained a normal working day. A caution to persons who planned to respect a call to stay away by suspected separatists.

His release read in part: “He further informs them (businesses) to stop respecting the so-called ghost town from unknown individuals.

“Defaulters of the above Municipal Order will have their businesses sealed till further notice considering that several communiques and press conferences have been held with them to desist from this phenomenon.” 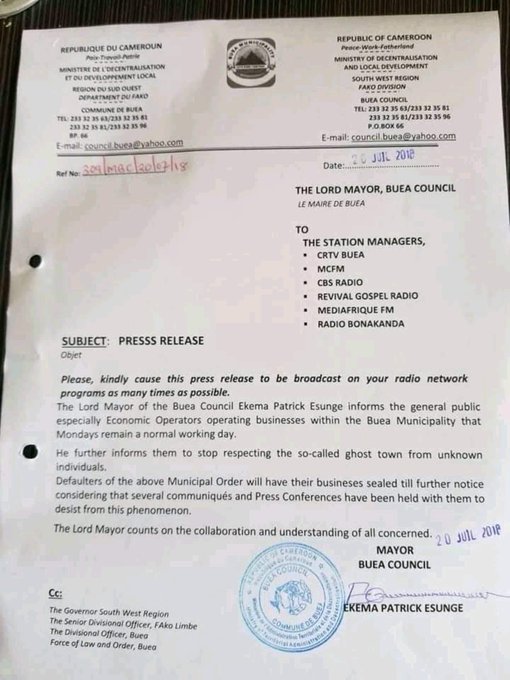 A week ago, a similar measure was observed by people of Buea who stayed away from engaging in any public activity. The move is employed by separatists who operate in the Anglophone region as a sign of control and influence.

The region – North West and South West – have been riled by violence as government forces engage in hostilities with separatists elements pushing for independence under the so-called Ambazonia republic.