CPDM: Biya and Jean Nkuete hold discussion on the bill of health of the ruling party

President Paul Biya and the Secretary General of the ruling CPDM party have held discussions on the bill of health of the party. Cameroon Intelligence Report understands the audience took place on Thursday the 18th of August 2016 at Unity Palace. A sister publication, Cameroon-info.net hinted that both men exchanged ideas on the preparations for the next congress of the party that has misruled the nation for the last 34 years.

Jean Nkuete, who moonlighted more than two decades ago as Minister of Agriculture had a three hours session with the Cameroonian dictator on the prevailing situation of the party and the preparation of the Congress.

Grégoire Owona, deputy secretary general of the Central Committee of the CPDM revealed a while ago that a congress was anticipated in September but avoided dishing out specifics and the precise date of the event.  The ruling CPDM party holds its ordinary congress every five years with the last dating back in 2011. The party is at the mercy of President Biya and his appointees with the 84 years leader enjoying the status of “natural candidate.” 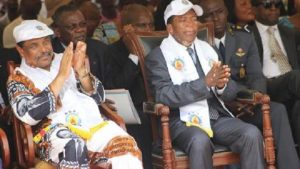