Some senior political commentators have accused the Paul Biya-led One Cameroon regime of toying with the nation’s unity and future.  Their comments were made public earlier today when state radio and television announced a ministerial order from the Minister of Territorial Administration and Decentralization banning the Cameroon Anglophone Civil Society Consortium and the Southern Cameroons National Council.

The decision by Minister Rene Emmanuel Sadi came after a declaration by the chairman of the so-called Ad Hoc Committee; Ghogomu Mingo Paul that the new generation of Anglophone leaders have unanimously resolved to resist any further dialogue with the Biya Francophone Beti Ewondo government.

Ghogomu Paul ignored claims by the Anglophone Consortium that the Yaounde regime was gambling with Cameroon’s future by continuing to maliciously deploy the military in the Southern Cameroons region and implementing sinister divide and rule tactics against Anglophone’s key actors.

The Minister Rene Sadi’s order has shut the door to the advice that was given to President Biya to personally and visibly head a holistic solution-seeking strategy that will prove his commitment to a robustly sustainable peace with British Southern Cameroonians.

Our chief political correspondent in Yaoundé opined that for there to be true unity, stability and progress in the country, President Biya should engage the Cameroon Anglophone Civil Society Consortium with new faces who are not going to be wasting time establishing so-called Ad Hoc Committees that will not resolve pertinent issues . 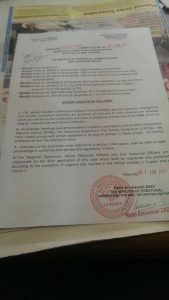 At the time of filing this report, the Cameroon Anglophone Civil Society had not reacted to the ministerial order published by the Yaounde regime.

‘Communion as a weapon’: Biden’s support for abortion rights divides the Catholic Church