“Our Lord Jesus Christ had to deal with just one Pontus Pilate” However, the Chairman of the Cameroon Anglophone Civil Society Consortium, Barrister Agbor Balla Nkongho appeared before a hall full of them and that comprised top Francophone military personnel including army generals and state prosecutors. The Wednesday meeting at a police station in Yaoundé was the leader’s first interrogation ever since his arrest in Buea on January the 17th 2017.

Consortium sources say the forum was an attempt to bully the leader to submission with treats of a death sentence. Our intelligence officers in Yaoundé who were at the hearing opined that the Chairman of the Cameroon Anglophone Civil Society Consortium remained calm during the process and blatantly refused to say a word in the French language despite pressure from his Francophone military oppressors.

Barrister Agbor Balla was questioned about his relationship with Lord Justice Ayah and his meeting with Cardinal Tumi some months ago. He rejected allegations that the Cameroon Anglophone Civil Society Consortium was receiving funding from secessionists militants abroad.  After the exercise he was taken back in a bus to his cell at the Kondengui maximum security prison. 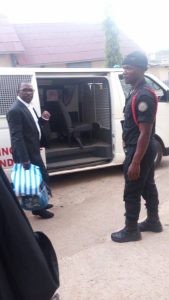 By Soter Agbaw-Ebai with files from Sama Ernest

‹ Reports: Some teachers headed by Tameh Valentine have been paid money by the government to call off the strike action › West Cameroon Crisis and the Consortium: Know Where You Stand In The Resistance