Chief Barrister Charles A.Taku, a product of Government Bilingual High School Buea, Cameroon College of Arts and Science Bambili and above all, the University of Yaounde, Cameroon has been appointed into the African Bar Association. The Executive Council of the African Bar Association made the decision public in a correspondence dated the 14th of September 2016 and signed by Hannibal Uwaifo and Flaviana Charles both President and Secretary General respectively.

His Royal Highness Chief Charles A. Taku started his legal career with the late BTB Foretia and set up the Taku Chambers thereafter. He was an ardent supporter of Mola Litumbe’s LDP party and the Union for Change headed by Ni John Fru Ndi. Chief Barrister Taku is a chartered member of the Cameroon Bar Council and in the words of the late Lord Justice Benson Bawak “a lawyer who has attended many international law conferences and developed a good network of contacts”.

His joining the defence team in the International Criminal Court in Rwanda and Sierra Leone was no surprise. Cameroon Concord News Group is not sure of any Cameroon Common Law barrister in the defence team in both of these courts. Chief Barrister Charles A. Taku works mainly in Africa but domicile in the United States of America. In his early days in Cameroon, he loved socialising at the Buea Mountain Club. It is hard to say when this legal frame work for academic reference will return to Cameroon and contribute to the development of the legal practice in the country while upholding his traditional title fully. 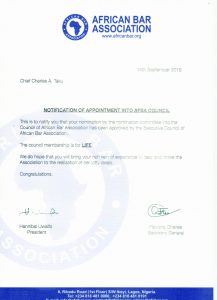 ‹ US: Thousands of students protest against Donald Trump › Conflicting reports on FECAFOOT and the clandestine immigration of dozens of Cameroonians to France