Cameroon Radio and Television, CRTV announced today Friday, September 23, 2016 a Prime Ministerial Order stating that: “You must be a Cameroonian to head any organization in the country.”  The Philemon Yang order modifies the 2015 law on the management of companies such as the one on authors’ rights. The current Prime Minister, Philemon Yang has bar the way to holders of a nationality other than that of Cameroon to occupy leadership positions in the country-among them, the artist Prince Ndedi Eyango.

Eyango had also seen his election as head of SOCAM (Cameroon Society of Musical Art) in November 2013 cancelled by the former Minister of Arts and Culture on the grounds that he was a US citizen. Ndedi Eyango during that time brandished a Cameroon national identity card and fought in vain to be reinstated as president.

The AGBAW-EBAI DEBATE understands that the daughter of the former head of state, Aminatou Ahidjo who is the current CEO of the Congress Hall in Yaounde has a Senegalese passport that was issued to her by President Abdou Diouf when the Biya regime cancelled their family travelling documents.  Some of the directors of CAMWATER, SNH, SONARA, CDC, SODECOTTON have European passports. 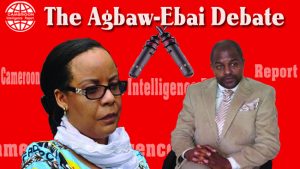 The man who blatantly refused our nation’s flag from the hands of Prime Minister Philemon Yang en route to the FIFA World Cup in Brazil has a Spanish passport.

In this edition of the AGBAW-EBAI DEBATE we are asking our readers to make known their case as it concerns the issue of dual nationality in Cameroon.