Vincent Nguini, a guitarist and composer from Cameroon best known for his long tenure in Paul Simon’s band, died on Dec. 8 in Abadiânia, Brazil. He was 65.

The cause was liver cancer, according to Mr. Simon’s manager, Jeff Kramer. He said Mr. Nguini had gone to the city, in central Brazil, to see a spiritual healer.

Mr. Nguini, who performed worldwide with Mr. Simon and recorded extensively as both a studio musician and a bandleader, was a nimble, adaptable guitarist with a quicksilver tone. He came up with playful melodies and intertwining lines that flexed like cat’s cradles.

Mr. Nguini had mastered styles from all around Africa and the Americas and was fluent in jazz, blues, salsa, samba, bikutsi and makossa from Cameroon, highlife from Ghana, juju from Nigeria, soukous from Congo and mbaqanga from South Africa, as well as Mr. Simon’s folk-pop. 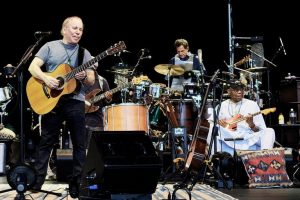 He became a collaborator with Mr. Simon, and a catalyst for him, in 1987, when he began arranging songs and meshing guitar lines with him. “He was the most creative musician I’ve ever worked with,” Mr. Simon wrote in an email. Although Mr. Nguini made his musical career first in Paris and then New York City, he often returned to Cameroon to generate ideas.

“Inspiration is not just listening to a melody,” he told The Cameroon Tribune in September. “It’s also hearing people talking, talking, listening to noises at the market. All this is a whole that inspires musically.”

Mr. Nguini was born in the town of Obala in Cameroon in July 1952 and soaked up African music along with imported rock and jazz during the 1960s and early ’70s. He was a fan of Duke Ellington, John Coltrane, Wes Montgomery, Jimi Hendrix, the Beatles, Stevie Wonder and the bluesman Albert King.

He traveled around Africa in the mid-1970s, learning many regional styles, before relocating to Paris in 1978. In Paris, long a recording center for pop from French-speaking Africa, he studied music and did studio work with many African musicians. He joined the band of the Cameroonian saxophonist Manu Dibango, who had an international hit in 1972 with “Soul Makossa,” and soon became its musical director.

Mr. Nguini began his collaboration with Mr. Simon after coming to New York City in 1987; they were introduced by the South African trumpeter Hugh Masekela. Mr. Nguini played guitar and devised arrangements on “The Rhythm of the Saints,” Mr. Simon’s 1992 album, and shared a songwriting credit for his curlicued guitar lines on a track from that album, “The Coast.” He continued to work with Mr. Simon in the studio and on tour until his final illness.

Mr. Simon said in his email that Mr. Nguini was “an extraordinarily melodic rhythm guitarist.” He added: “By that I mean his rhythm parts were usually repetitive lines — very West African — rather than strumming chords. His style was unique and can’t be fully understood except by the most sophisticated players.”

Mr. Nguini was also in demand for recording sessions. Among the artists he backed were Peter Gabriel, the Neville Brothers, Jimmy Buffett, Josh Groban and Angelique Kidjo. In the 1990s and 2000s he released albums as a leader on his own label, Vincent Nguini Records, which mingled intricately layered, globe-hopping instrumentals with amiable Afropop songs topped by his own lead vocals. He continued to release new musicwell into 2017. He is survived by his wife, Florence; his daughter, Olivia; two sisters, Nomo and Mayo; and a brother, Jean Marie.

US: Optimistic Biden vows to work with Republicans