Buea: Suspects arrested in connection with the murder of mother-of-three

Mystery is still hovering around the circumstances of the death of Molua Odilia, a young woman aged 33 years whose lifeless body was found in the early morning on the bitumen not far from Soppo market in Buea. Doctors who appraised the body soon after the discovery revealed that the lady was strangled.

In the course of investigations to find her possible murderers, the Buea police have already arrested some suspects among them her companion which she had gone to visit three days before this tragic incident. 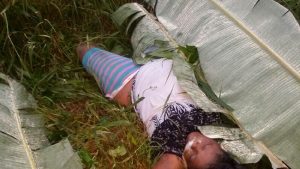 The family of the mother of three is still in shock. This is the second tragedy in the capital of the South-West Region within a month involving a young lady.

By Tina Nene Nganda with files from CAMCORDNEWS

‹ Cameroon and the Confederation of African Football: No Longer At Ease › Saudi-led blockade against Doha pre-planned campaign