The Francophone regime in Yaounde has revealed that the sum of 130 million FCFA was paid out to the gang of CPDM barons who recently travelled abroad to meet Southern Cameroonians. The group that was led by the incompetent Minister of Justice, Laurent Esso did not produce the expected results and President Biya was forced to make a dramatic U-turn and ordered the release of the detained leaders of the Cameroon Anglophone Civil Society Consortium. 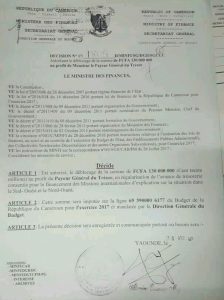 In the document, a source at the MINFI leaked to the media that the Biya acolyte authorized the release of 130 million CFA francs from the treasury coffers for the financing of the international mission. Our chief political correspondent in Yaounde noted that it was a CPDM pattern of wasting tax payers money on a mission that was deemed unnecessary by Southern Cameroonians.

It should however be mentioned here that the regime had hosted a diaspora forum in Yaounde and cat calls had also greeted the decision of sending cabinet ministers abroad from the opposition including the Social Democratic Front.