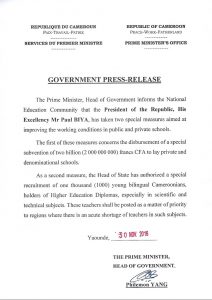 Talks between the Anglophone Teachers Trade Unions and the Biya Francophone Beti Ewondo government have broken off. A statement from the Prime Minister says President Biya has decided on two measures aimed at improving the working conditions in public and private schools. The Biya decision read on state radio and television made a mockery of Prime Minister Philemon Yang who met the Anglophone teachers as a conciliator but could not reach an agreement.

Biya has announced the disbursement of a special subvention of two billion FCFA to lay private and denominational schools and a special recruitment of one thousand young Francophone bilingual teachers who are holders of Higher Education Diplomas to take over the schools in British Southern Cameroons.

Anglophone Teachers have been crystal clear. They want real, concrete improvements to the bilingual structure and nature of the country.  They want to teach, not more empty promises and rhetoric. The Anglophone teachers trade union statement published recently stated that children in boarding schools will be sent home on Friday December the 2nd 2016. The statement also said schools in Anglophone Cameroon will be close for a year if negotiations with the Francophone regime fail.

The President Biya decision via a prime ministerial order signed by Philemon Yang is an indication that Yaoundé will never listen, noted a teacher from Government High School Mamfe who sued for anonymity. Cameroon Intelligence Report gathered from a source close to the Minister of Higher Education that the Anglophone teachers and lawyers tabled an unrealistic proposal that Francophones can never accept.

Prime Minister Philemon Yang declined interviews in Gabon over the issue where he recently represented the Cameroonian dictator during a security and political crises meeting grouping member states of ECCAS on Wednesday in Libreville.

The Anglophone teachers’ trade union and the Biya Francophone government have been engaged in an ongoing dispute for the last week. The Anglophone Prime Minister and the Anglophone trade union leaders reached tentative agreements and now Biya and his pro Yaounde comedians have voted against those deals.