French Cameroun is reportedly smuggling weapons and ammunition to prominent militants of the ruling CPDM party in Southern Cameroons through Camair-Co flights from Yaoundé and Douala to Bafut airport in Bamenda, according to intelligence information revealed by a well-placed government official with ties to the Southern Cameroons Governing Council.

An operations manager of the Cameroon Anglophone Civil Society Consortium in Bali who confirmed the news also sent an urgent email to Cameroon Intelligence Report in which he revealed the smuggling route from La Republique to West Cameroon. Our source hinted that some of the weapons have been kept at the royal palace of the Fon of Nkwen who recently promised to create a vigilante group to protect Francophone kids in the 2017/18 academic year in the Bamenda County. 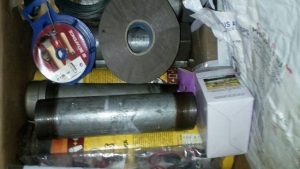 The Camair-Co plane flew directly to the airport in Bafut and from there the weapons were transferred on the ground to Bamenda, Nkwen, Mbengwi and some to Kumbo in Bui. The Biya Francophone Beti Ewondo regime in Yaoundé continues to violate the sovereignty of British Southern Cameroons after the union with French Cameroun was dissolved following the creation of La Republique du Cameroun by the 85 year old dictator.

We understand the highly publicized police action in Mbengwi is part of a CPDM diabolic harsh ploy to spread fear among Southern Cameroonians and push for the resumption of schools in Southern Cameroons. The Francophone political elites are creating small groups and have started arming them to undermine stability in the entire Southern Cameroons.

Even with the war against the Nigerian Islamic sect, Boko Haram and the deteriorating security situation in the Central African Republic, there has been a massive transfer of French Cameroun military personnel into strategic Southern Cameroons counties. French Cameroun military bases in Southern Cameroons possessed 17 times more weapons than it did in the 90s during the emergence of the SDF.

‹ Russia surveillance aircraft flies over Washington › Southern Cameroons deepening crisis: What do you think is the main reason behind?