The Francophone Minister of Finance has threatened to shut down the Regional Headquarters of a Southern Cameroons Bank. National Financial Credit Bank premises in the Bamenda County closed from Monday to Wednesday last week following orders from the Southern Cameroons Governing Council.

However, the regional bureau of the National Financial Credit Bank of Bamenda received on September 23, 2017, a threatening correspondence from the Minister of Finance, Alamine Ousmane Mey. In his letter, the member of the Francophone Government indicated that the financial institution continued to keep its doors closed on working days.

“During an unexpected visit by the local authorities to your branch, your bank has been found to be closed on business days in violation of the provisions of the license issued to you by the Monetary Authority,” reads the correspondence . The Minister of Finance reminded the Regional Manager of this bank in Bamenda that he had personally taken part in a meeting convened by the Prefect of Mezam and was aware that opening the bank office was part of a policy to normalize socio-economic activities in Bamenda. 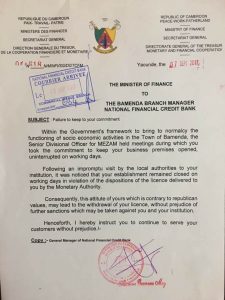 The National Financial Credit Bank (NFC BANK), which is threatened with closure, is headquartered in Yaoundé with branches in some regions, including the Bamenda Province in Southern Cameroons. For fear of being vandalised or burning, the institution remains closed from Monday to Wednesday as activists of the anglophone crisis observe ghost town operations.

Ever since ghost towns were intensified in Southern Cameroons precisely on the 14th of August by the Southern Cameroons Governing Council and the Cameroon Anglophone Civil Society Consortium, shops and several businesses have remain closed. On the 28th of August, the so-called Government Delegate to the Bamenda Urban Council took a CPDM Francophone initiative to seal all the shops that had not opened their doors at the Bamenda market.

Manyu: Oil and gas show up in Mamfe