The French Cameroun Prime Minister, Philemon Yang who hails from West Cameroon is fighting for his political survival after Southern Cameroonians abandoned the 56 years old marriage with La Republique du Cameroun in a general uprising that has left the country facing a prolonged period of uncertainty.

President Biya’s outgoing government saw its support slump and eventually disappeared as Southern Cameroonians flocked to Southern Cameroons Ambazonia Governing Council, the Anglophone Cameroons new version of the SCNC which has staged a remarkable recovery to become the decisive political grouping in the new Republic of Southern Cameroons.

“Tsunami” was the word used by several Southern Cameroons newspapers recently to describe the outcome of the October 1 Independence Day celebrations that President Biya and Mr Philemon Yang looked certain to dominate just a year ago. But both men’s inability to persuade Southern Cameroonians that Cameroon remains one and indivisible has cost Yang and President Biya their majority following — and perhaps their jobs.

Even with growing calls for Prime Minister Philemon Yang to severe links with Ghogomu Paul Mingo and to open genuine dialogue with the leadership of the Governing Council to either form a federated structure, the unpopular head of government from Oku has kept his man and they are heading to Southern Cameroons to stage a repeat of the one year old comedy and tragedy with the moderate leader of the Consortium and some Bamileke lawyers based in the territory. But this current arrangement would require them to overcome almost a 56 years old Francophone/Anglophone divisions dating from a French teleguided coup against Southern Cameroons in Foumban in the 1960s. 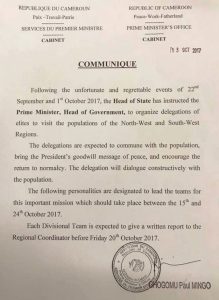 Cameroon Concord News Group and the Cameroon Intelligence Report are focusing instead on a new Cameroon after Biya and the terms of separation no matter how long the process will take. It is time for this new generation of Southern Cameroonians to live up to the greatness and to prove themselves renewed and worthy of a future by staging a massive ghost town operation against Philemon Yang and his gang.