A popular strike action that started earlier in the afternoon in Bamenda has not weaken. Our intelligence officers have reported that lights have gone off and the bustling city has been transformed into a theater of clashes between the population and the forces of law and order.

Security forces have been firing bullets in the air in order to place the city under control. Pressure is mounting as the protesters are calling for the creation of an Anglophone state. It all started with a simple teachers’ strike then things erupted into a popular demonstration against the corrupt regime in Yaoundé. 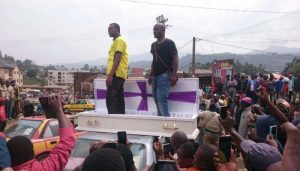