The leaders of the Cameroon Anglophone Civil Society have moved the seat of co-ordination of the organization from Southern Cameroons territory to Europe. In a press release signed by the Chairman Barrister Agbor Balla some few hours before his arrest, the Consortium anticipated the recent actions taken by the vicious Francophone regime in Yaounde and hinted that Mark Bara and Ivo Tapang should run the affairs of the body.

The communique also called on Southern Cameroonians to observe the ongoing civil disobedience campaign for a period of one month until further directives are given. Barrister Agbor reminded West Cameroonians of the neccesity to stay away from violence during the struggle. Correspondingly, ghost town operations will hold from the 23rd of January to the 23rd of February 2017. Attached to this report is a copy of the Consortium press release 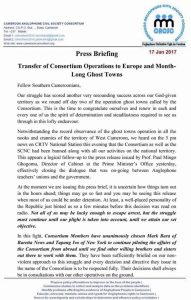 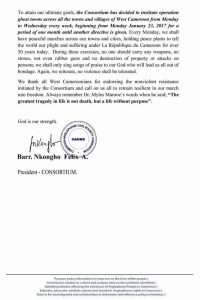 By Sama Ernest in Buea

US: Optimistic Biden vows to work with Republicans

Prosecution should seek the death penalty against Belinga Amougou