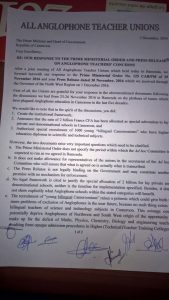 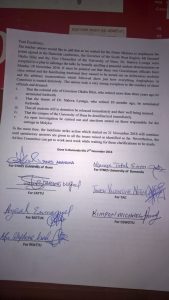 Anglophone teachers have kicked against the Biya Francophone Beti Ewondo government’s recent move to end the lingering strike by the teachers, saying that no amount of coercion will make them return to work unless the contentious issue of the bi-cultural nature of the country’s education system is satisfactorily resolved.

Speaking on the so-called Prime Minister Yang Philemon’s proposal to end the strike, the teachers trade unions have issued a statement saying  that the government was making moves to engage those they described as thugs to masquerade  themselves as 1000 bilingual teachers in order to open schools in British Southern Cameroons.

Describing the move as an exercise in futility, the teacher’s trade unions have rejected the proposal from the Prime Minister because the proposal was not time structured and many issues were not specific. BBC’s Randy Joe who had a conversation with one of our intelligence officers in Yaoundé today opined that the Biya proposal did not offer anything to the Anglophones.

One of the teachers who spoke to CIR but sued for anonymity regretted the Biya regime’s constant refusal of the Anglophone problem.  Contrary to announcement made over state radio and television, the Anglophone teachers have made it abundantly clear that their strike action continues unabated.

Southern Cameroons Crisis: Biya leaves for Washington via Geneva but might face a storm in the US