The Cameroonian President-Dictator has signed another decree ordering the “discontinuation” of proceedings before the Yaoundé Military Tribunal against hundreds of Southern Cameroons activists. Biya has kept to his outdated pattern of governance and his acolytes, his critics, and the media alike have portrayed them as dramatic u-turn on the war in Southern Cameroons.

The Biya decision has reportedly affected some 289 Ambazonian detainees and we understand the decree will be implemented by the Minister Delegate at the Presidency in charge of Defense, Joseph Beti Assomo. Biya’s high-profile orders have merely allowed him to announce his intentions to the international community but have not stopped the killings going on in Southern Cameroons. So far, they’ve been more like text messaging than governing, proclaiming his goodwill without really advancing it. 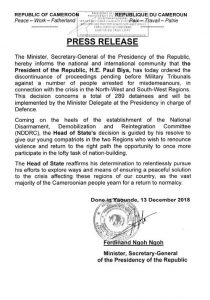 A close look at the language of today’s decree shows that nothing has changed in Yaoundé but basically new releases with presidential signatures, plus instructions to his cabinet ministers to look into the issues at hand. In hosting the Africa Cup of Nations, Biya simply directed his Secretary General at the presidency to devise a plan. His decree on the Anglophone crisis set up a Paul Ghogomu commission. His war decree on Southern Cameroons and Boko Haram instructed cabinet ministers and the military leadership to devise plans to achieve those goals.

Some pro CPDM comedians have however opined that today’s decree comes as a follow-up to the setting of the so-called disarmament, demobilization and reintegration committee for ex fighters of armed groups in Southern Cameroons. It is indeed an empty decree.

‹ Ambazonians have created their own cryptocurrency › Southern Cameroons Crisis: Doing too little too late