The Interim President of the Federal Republic of Ambazonia, Sisiku Ayuk Tabe, the President of the Global Peace Movement, Dr. Mick Uyi and the Deputy Mayor of Hammersmith, Mercy Umeh are among leaders invited for the London Political Summit organized by the London Metropolitan University.

The London Summit will be among a series of talks expected to be held in the UK on Friday the 17th of November  2017 by the Ambazonian chief executive. Sisiku Tabe has frequently been accused of maintaining a deliberate silence over the genocide going on in Southern Cameroons but aides described his decision to return to London as an effort to reset relations with the Southern Cameroons Diaspora and to launch a relief support program for the thousands of Ambazonia refugees in the Cross River State of Nigeria. 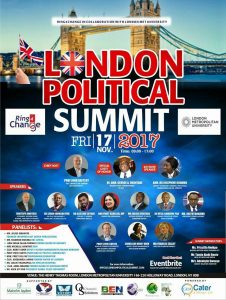 There will also be a photo exhibition in London of the atrocities committed by French Cameroun troops against the people of Southern Cameroons ever since the beginning of the uprising and the declaration independence as well as bilateral talks between the Ambazonia leadership and the Southern Cameroons poltical elites.

In addition to his presentation at the London Metropolitan University, His Excellency Sisiku Ayuk Tabe will meet with a visiting Ambazonia delegation from the USA. The leaders of Ambazonian communities in Germany, Belgium, Spain, Ireland, Turkey, France, Norway and Holland have also been told to participate in the London Relief Program.  The speech by President Ayuk Tabe will be the Sisiku’s first foreign declaration since becoming interim president after the fourth conclave of the Southern Cameroons Ambazonia Governing Council.

Our correspondent in Lagos, Nigeria hinted that President Ayuk Tabe will use the London Metropolitan University forum to send  a clear message to the world that the Federal Republic of Ambazonia and the United Kingdom including the European Union can form a partnership.