The charred ruins of some 70 homes dot the streets of Alatchu village in Cameroon. The houses were razed by government troops after anglophone separatists seeking independence from the francophone majority allegedly killed two government soldiers.

On the sidewalks of the village, a few traders sell fuel while others struggle to find buyers for their freshly made palm wine. On a normal weekday, children would be on their way to school.

But that hasn’t happened in nearly three years in Alatchu, a now sparsely populated village just outside the Northwest regional capital of Bamenda. Recent fighting in the village left at least one person dead.

The separatists have made school boycotts a major part of their campaign for a new anglophone nation called “Ambazonia”. According to UNICEF, more than 600,000 children have been affected by school closures.

The UN says more than 80 percent of the schools in Cameroon’s two predominantly anglophone regions – Northwest and Southwest – are still closed. More than 70 have been destroyed, while students, parents, teachers, and other school personnel are subjected to routine violence and intimidation if they refuse to toe the boycott line.

“I lost my job in November 2016 because schools shut down,” one teacher told The New Humanitarian, speaking on condition of anonymity because of security concerns. “I was against the school boycott, and my house and property were burnt because of that.”

With peace talks deadlocked, some 1.3 million people are now in need of humanitarian assistance, and the number of those displaced in the two anglophone regions has climbed to 450,000.

Half of those displaced are children – many of whom fled with their families after schools were shut and the buildings were used as barracks or hide-outs by armed groups. 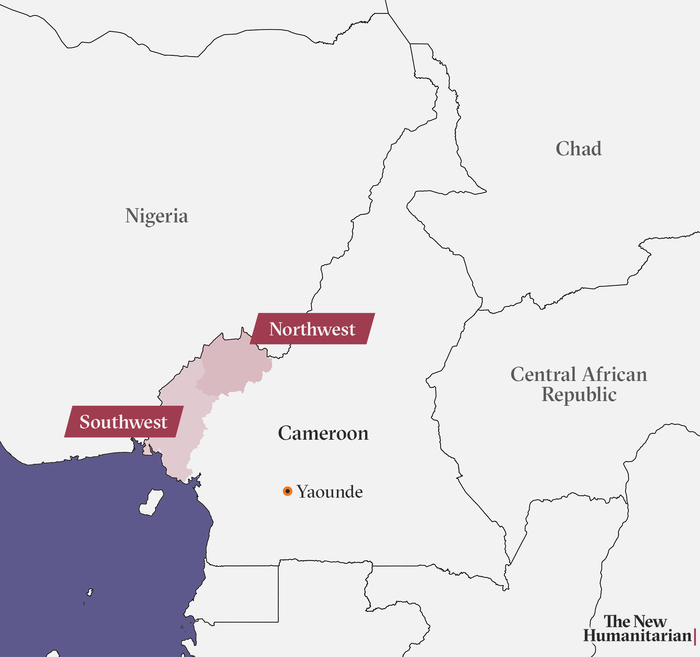 Targeting the education system is “putting the future of an entire generation of children at risk – children who with the right support and opportunities can build a more stable and prosperous future”, UNICEF spokesman Toby Fricker said last month.

The number of children being kept out of school in Cameroon has spawned #educatethemnow – a homegrown movement urging government forces and separatist groups to respect schools as ‘no-go’ zones.

The conflict in Cameroon has been described as one of the world’s neglected crises.

French and English are both official languages in Cameroon, but the anglophone minority has long felt marginalised.

Peaceful protests from groups calling for the use of English in courts and school classes in the Northwest and Southwest regions escalated in October 2016 when security forces killed dozens of demonstrators and jailed hundreds more. The situation deteriorated a year later when separatists unilaterally declared independence and the armed conflict intensified.

The violence led to the creation of several separatist armed groups that have since allegedly killed or kidnapped dozens of people, while government forces have carried out violent raids against rebels. Part of the separatists’ civil disobedience campaign has been to close businesses and schools, turning many villages into ghost towns.

According to the International Crisis Group, the clashes have killed at least 1,850 people since 2017, but other estimates say the toll could be as high as 5,000.

Separatists are calling for mediated talks on independence. The government has balked at demands for independence but says it is willing to consider decentralisation.

The insecurity and instability have also sharpened humanitarian needs outside the Northwest and Southwest regions.

Most of those displaced are in the country’s two majority anglophone areas, but an estimated 30,000 others have fled to neighbouring Nigeria, while some 4.3 million people in the country overall need humanitarian assistance.

“We got here with no property, no money, no nothing,” said the teacher from the Northwest region, who fled to the capital of Yaoundé after losing his job in 2016. “Friends and people who pitied us on the streets helped us get two rooms. We sleep on the floor – no beds, no mat… not even a drinking bucket or food to eat.”

The teacher and his wife had seven children. One was killed by a stray bullet as they fled for safety. Three have returned to school with the help of neighbours. The others haven’t been to school in three years.

The teacher said schools, businesses, and houses in his village of Kumbo now lie derelict, covered by grass and weeds. 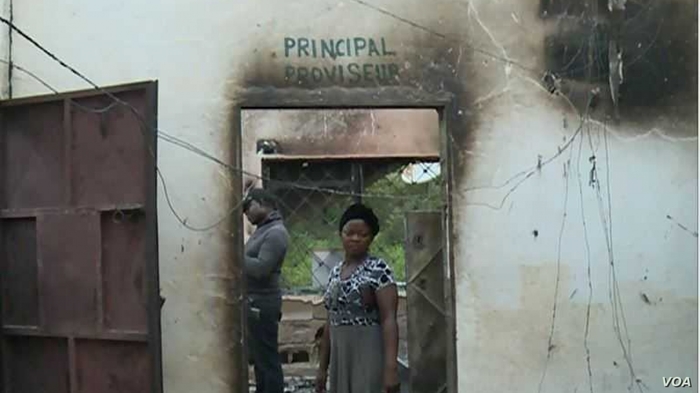 Catholic Bishop George Nkuo of the Kumbo diocese told TNH that more than 380 civilians were killed and more than 700 homes torched in the area from September 2018 to March 2019.

There have been “practically no schools functioning in the area for the past two years”, he said, adding that they closed shortly after students at one Catholic school were kidnapped – a move allegedly taken by separatists to try to enforce the school boycott.

Many warn of far-reaching consequences for the country if children fail to return to school. Some say they have already witnessed the consequences.

Agbor Gilbert Ebot, a Cameroonian filmmaker who has spent time in several camps for internally displaced people in Cameroon and refugee camps in Nigeria, warns that the children face particular risks from sexual harassment and criminality.

“I visited Cameroonians in a refugee camp in Nigeria and returned 10 months later to find a 15-year old with a set of twins,” he said. “I asked her what had happened while I was away, and she said men wanted to sleep with her before helping her. She has two younger siblings to feed.”

Ebot said young girls who have dropped out of school have reported being sexually harassed by both government soldiers and separatist fighters. Some who have become pregnant are often left with no help from the fathers, he said.

“If parents want to send children to school, they can do so at their own risk.”

Boys, Agbor said, are often forced to leave schools because the military targets them, and many end up becoming separatist fighters.

The government hopes to reopen schools in September, and says it will drive out rebels occupying buildings.

The government says 50 schools are still being occupied by separatists in the Northwest and Southwest regions – a charge the rebel groups deny.

“Our position on the reopening of schools is very clear,” Tanku told TNH. “If parents want to send children to school, they can do so at their own risk because we cannot guarantee their safety on the streets and in classrooms being burnt by the military. Our streets need to be completely demilitarised.”

Culled from The New Humanitarian