Cameroon’s president has ordered its main Douala port to suspend contract talks with Swiss firm Terminal Investment Limited (TIL) until the conclusion of a court case brought by France’s Bollore, according to a letter seen by Reuters.

TIL was chosen to renovate and manage the Atlantic port in September after Bollore, which had managed the hub since 2015, was eliminated earlier in the bidding process as it sought to renew its contract. It is contesting the decision in the Cameroonian courts.

The Oct. 23 letter from the secretary-general of the presidency asks the director-general of Douala port “to suspend works to finalize the terms of the (TIL) contract … until the final conclusion of the case.”

A photo of the letter, which is marked “Confidential Very Urgent,” has been shared widely on social media. A source at the port confirmed its authenticity. Cameroon’s government spokesman could not be immediately reached for comment. 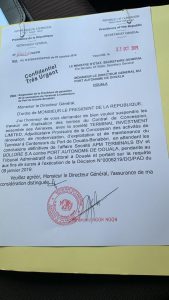 The request coincides with an official three-day visit by French Foreign Minister Jean-Yves Le Drian to Cameroon to support the resolution of its long-running conflict with Anglophone separatists.

France, the former colonial power, has had a frosty relationship with Cameroon over the last year over concerns about how President Paul Biya has handled the crisis, which has cost close to 2,000 lives over the past two years.

However, French diplomats said recent discussions about granting special status to Anglophone regions and the release of hundreds of political prisoners paved the way for Le Drian’s visit.

French officials had said the trip would also focus on development of Cameroon’s Kribi port, which is operated by Bollore, French firm CMA CGM and China Harbour Engineering.

Douala, located on the Atlantic coast, is the hub for Cameroon’s exports of cocoa, oil and timber.

In September, the port said TIL had been provisionally designated the winning bidder of the contract and would take control of the port on Jan. 1, 2020. TIL did not immediately respond to a request for comment.
Source: Reuters

Southern Cameroons Crisis: Banana exports down by over 6,500 tons