US: Senator Sanders vows to do his best to ‘stop US attacking Iran’

US 2020 presidential hopeful Bernie Sanders says a war with Iran would “be based on a lie” just like the US invasion of Vietnam and Iraq in the past, vowing to do whatever he can as an American senator to “stop US attacking Iran.”

The Vermont lawmaker made the comment in an interview with MSNBC Wednesday, further calling the Saudi Arabian government a “brutal regime.”

Sanders called the Iraq and Vietnam wars “the two worst foreign policy disasters… based on lies that came from the White House.” 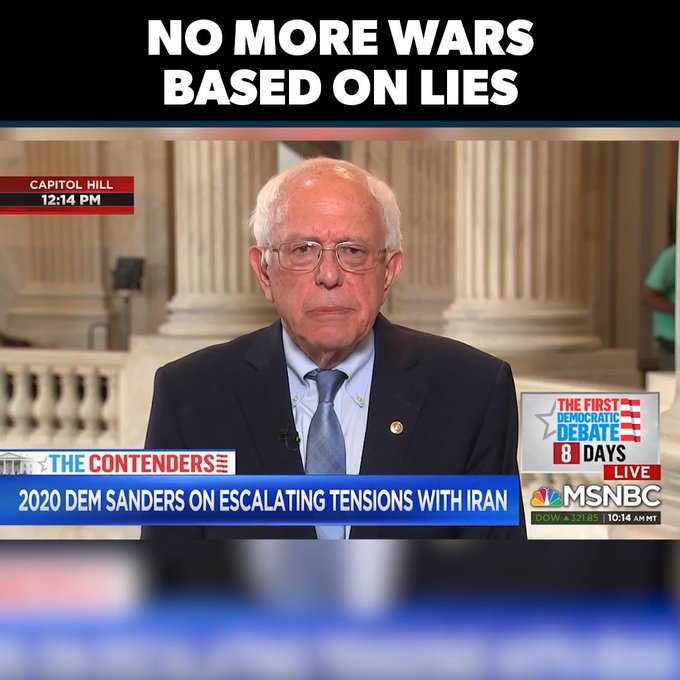 “I will do everything that I personally can as a United States senator to stop the United States attacking Iran,” said the independent candidate. “If we go into a war with Iran, this will be an asymmetrical war… There will be never ending wars in the Middle East. It will make the war in Iraq look like a cakewalk.”

The socialist democrat further called for using “the power of the United States to work out a diplomatic solution not a military solution” for the conflict between the Islamic Republic and the Saudi monarchy.

The US has been stepping up threats against Tehran in part by the recent announcement to deploy 1,000 additional forces to the region in the wake of allegations that Iran was behind tanker attacks in the Sea of Oman.

Iran has categorically denied the accusations, calling them baseless, even suggesting that Washington may be behind the attacks.

Tehran has time and again noted that it stands ready to defend its interests in the region in the wake of US aggression.