30th November 2017, is on record as the day French Cameroun president, Paul Biya, instructed his army to launch an extermination campaign on the people of Southern Cameroons (Ambazonia). His purpose and ambition have proven to be unwise, dishonourable and counterproductive. Army loyal to his regime have since burned down over 320 of our villages, killed more than 10,000 of our men, women and children.

Following these indiscriminate massacres and the burning down of our villages, properties and livestock, the people of Southern Cameroons took up arms as a policy of self-defence.It’s important that the rationale underpinning self-defence is not lost. The international community is fully aware of the atrocities committed upon our people. Ambazonian self-defence forces must remain certain that dignity in their purpose and cause is fundamental and non-negotiable.

A recent audio, allegedly recorded in Ambazonia by self-defence forces is circulating on social media drumming threats to the life and dignity of Archbishop Andrew Nkea of Bamenda.

The Interim Government of Ambazonia, by this proclamation is condemning such threats as unwise and unacceptable. I’m hereby calling on persons connected to these threats or activities to desist with immediate effect. The genocide on our people has received the attention of the international community due to atrocities by French Cameroun’s military. Southern Cameroon’s self-defence forces must recognise that violence against civilians, children, women, humanitarian workers and the clergy is inexcusable and against international law. 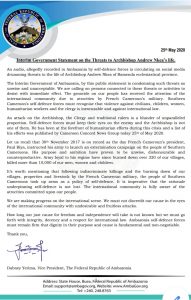 An attack on Archbishop Andrew Nkea and the clergy will be a blunder of unparalleled proportion. Self-defence forces must keep their eyes on the enemy and Archbishop Andrew Nkea is not one of them.As a government, we endorse today’s editorial column of the Cameroon Concord News Group that enumerated the positive role the Archbishop and the Roman Catholic Church have played in our fight for freedom and independence.

We are making progress on the international scene and a key player in our effort at seeking a peaceful end to this genocide on our people is the Roman Catholic Church. We must not discredit our cause in the eyes of the international community with undesirable and fruitless attacks. We cannot afford to lose vital international partners now.

How long our just cause for freedom and independence will take is not known but we must go forth with integrity, decency and a respect for international law.

‹ Ex-Roma And Cameroonian Footballer, Bouasse Trafficked Into Italy At 16, Has Died Age of 21 › ‘Africa will be strong’: Galaxy of superstars hold virtual coronavirus concert