Southern Cameroons: What has happened to Chief V.E.Mukete?

What has happened to Chief V.E.Mukete?

That’s the question every Southern Cameroonian in the Meme County is asking, amid all kinds of rumors following the Bafaw paramount leader’s uncharacteristic Friday absence from the opening of the House of Senate in Yaoundé.

Nfon V.E.Mukete was last seen alongside his young wife during a Eucharistic celebration at the Bastos Presbyterian Church in Yaoundé, and several social media outlets are speculating that the 104-year-old may be ill.

The rumors intensified today with information that his children Abel, Mbe, Diko, Ekale, Ebako, Ekoko are all involved in a bitter war for the throne. Social media reported that Ekoko Mukete has already been presented to the Bafaw royals as the new king. 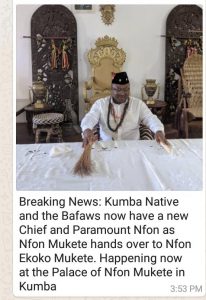 Cameroon state radio and television (CRTV) broadcasted images of Chief V.E.Mukete’s empty chair at the House of Senate, the country’s Upper House; the first His Majesty V.E.Mukete has missed since coming to the senate.

Such rumors have been fueled by reports that there is infighting deep inside the Bafaw royal family.

Cameroon Intelligence Report sources gathered that the paramount leader of the Bafaws was rushed to hospital after news of the passing away of his younger sister Princess Hannah Bokeng Sone was revealed to him.

CIR is keeping a watchful eye on the developments in the Bafaw royal family and will keep our readers posted as we get it!!