After four years of civil war in Anglophone Cameroon, state and rebel forces have refused to engage in serious dialogue while citizens and children suffer in crossfire. DW’s Adrian Kriesch reports from western Cameroon. 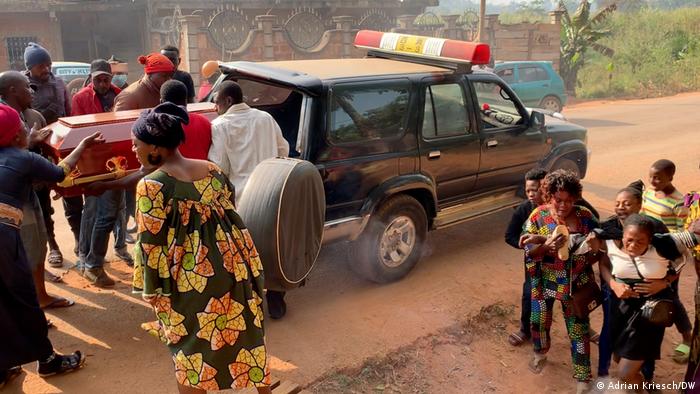 “Drive on!” a soldier shouts at us in the middle of Bamenda, the economic capital of northwestern Cameroon. We have stopped because a large pool of blood, next to a pair of plastic sandals, blocks our way.

Meanwhile, around us, soldiers go house-to-house. A street further on, they load young men onto a lorry because they cannot show proof of identification.

“We’re scared of the army. They make us very angry,” a young motorcycle taxi driver tells us.

Violence has escalated in Cameroon since 2016. Lawyers in the city of Bamenda had taken to the streets, protesting the neglect of the English-speaking minority in the western regions of Cameroon. Soon, other branches of civil society joined.

Cameroon became an independent country in the 1960s by merging a former French-speaking mandated territory and an English-speaking one. To this day, formally there are two official languages (English and French), two education systems, and two legal systems.

But, in reality, the English-speaking minority in western Cameroon has felt disadvantaged, neglected and oppressed by the central government in the capital Yaounde.The state reacted to the peaceful protests in 2016 with force. At least six people were killed, and soon afterward, armed resistance groups formed. The security situation remains out of control.

Bamenda’s mayor Paul Achobang is a member of President Paul Biya’s party. Biya has been in power in Cameroon for almost 40 years. But since the beginning of the crisis, the 87-year-old strongman has failed to visited the region once. Instead, he is said to spend weeks Swiss luxury hotels, booking entire floors. 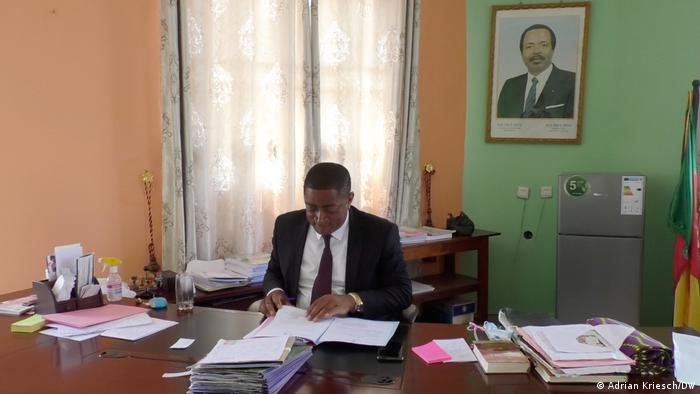 Still, Biya — whose portrait hangs in the mayor’s office — is seen by some, including Achobang, as a father figure. According to the mayor, Biya wants the best for everyone, has offered amnesty to all, and, if the region is neglected, it is down to lazy parliamentarians, or there are not enough resources to go around.

The government would like to repair the disastrous roads, but no company has tendered for the contract, because it is too dangerous.

“Is Paul Biya at fault?” asks Achobang before answering himself: “No, it’s the people of Bamenda.”

Besides, he claims, Bamenda has improved dramatically due to “Operation Clean Bamenda,” a military maneuver that has the army greatly increase its presence in the city.

“Sooner or later we won’t hear any shots being fired here,” declares Achobang.

But just a few hours later, shots ring out across Bamenda, and an explosion is heard. Two days later, 8-year-old Nsoh Macpeace is buried. Separatists and soldiers battled in front of his home, and when the child left the house, a grenade exploded. 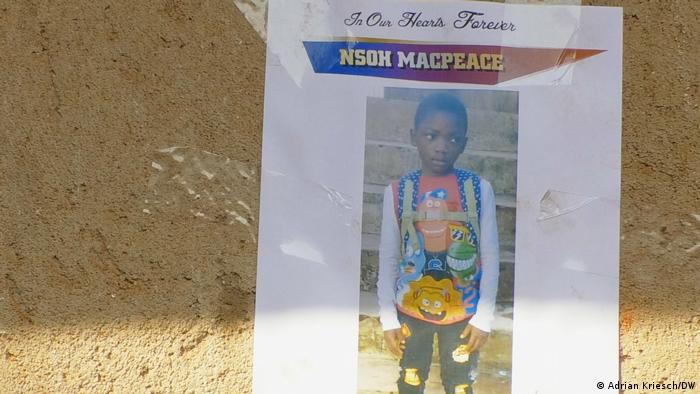 Nsoh Macpeace died in crossfire between separatists and government soldiers

“The boy is so experienced with this conflict over four years. He knew where to hide when people were shooting,” says his aunt Gladys Kum, as she struggles to hold back tears.

On this day, he hid with his grandmother. “This explosion with the grenade — they were lying there, waiting for the child to come out, it happened,” Kum says.

“I don’t know why God allowed this to happen How long will this go on?!”

Bamenda is filled with fear of attacks by soldiers and separatists. Everyone knows someone kidnapped for ransom. Schoolchildren only wear uniforms during classes because they fear being kidnapped by separatists if they wear their school uniforms in the town.

In the countryside, most schools have been closed for the past four years. Separatists target schools to pressure the government. In October, a shocking attack killed seven children in the town of Kumba.

We travel to Numba. The road is a procession of checkpoints, where security forces openly drink liquor and demand bribes. Further along, a gang of separatists armed with hunting rifles and machetes holds us up. Their leader, Kevin, says he was a former student at the University of Bamenda, while another member of the gang counts money collected from passing cars. 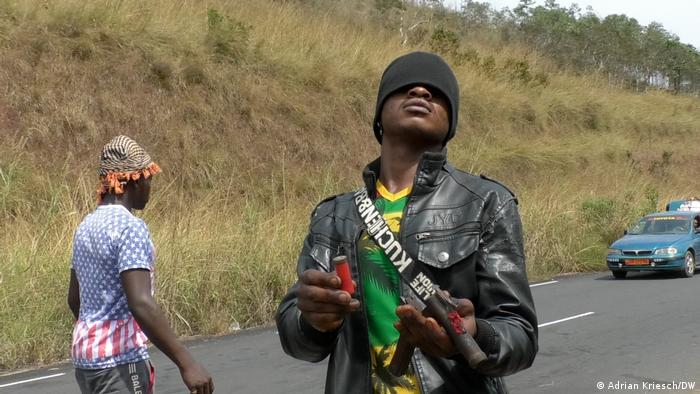 Kevin claims the locals willingly give money to the fighters. The soldiers are the evil ones, he says: “They rape, burn houses. They commit so many crimes. They rape young women.”

In Numba, Pastor Roland Arrey says he is tired of hearing the same thing.

“Everyone wants to tell their story and show they are winning,” he says, “but nobody wants to engage in dialogue. They are playing peoples’ lives.”

Both the military and the separatists are accused of profiting financially from the conflict. Any peacemaking dialogue seems a long shot: The government has incarcerated an important separatist leader. Meanwhile, separatist groups do not speak with one unified voice.

Many used to sympathize with the separatists, but now that has changed. Pastor Arrey looks downcast as he walks through the remains of the village school. Torn schoolbooks litter the floor, broken desks stand aside. Schools should have reopened in September, but separatists threatened the teachers.

“The school symbolizes a lot for every community that aspires for development and growth. How does a community like this build a future with children that have never gone to school?” he asks in a hollow voice. 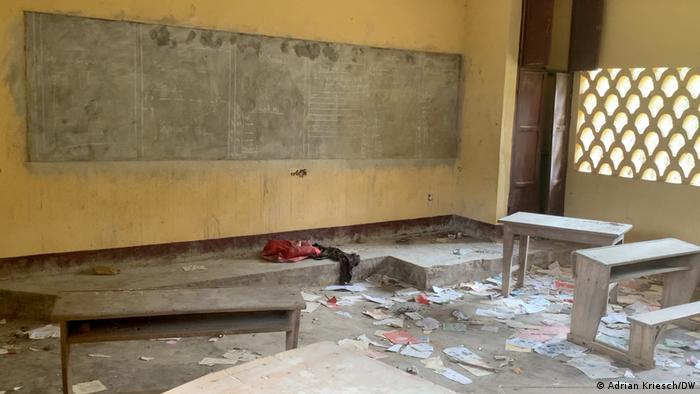 The German government said in 2020 that gross human rights abuses and atrocities have been committed by both actors in the conflict. Only dialogue, Berlin said, would solve the crisis — and Germany welcomed new laws to decentralize Cameroon’s government as “an important signal in their readiness to compromise and engage in dialogue.”

In the town on Numba, Pastor Arrey has provided a ray of hope by building a youth learning center. Young people can train to become tailors or barbers. An alternative school program is available to children three times a week. 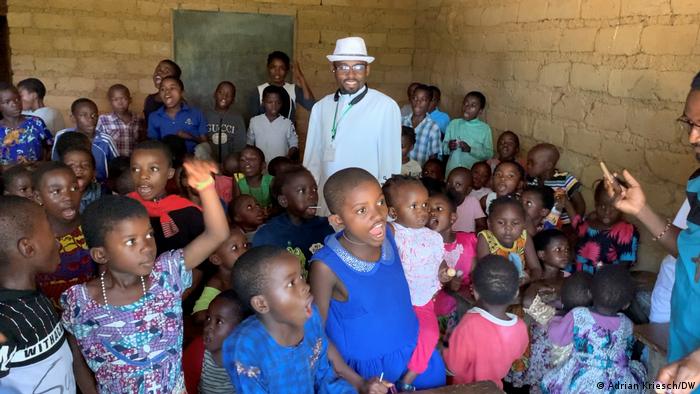 Youngsters sit in an overcrowded classroom. Two volunteers from the village take the classes: in one corner, a woman teaches the older children to write. In another corner, younger children listen as they are taught to read.

This kind of center is a blessing, says a smiling Pastor Arrey. For him, life is worthless without hope.